I have finally had 5 minutes to sit down with a coffee and start a journey/blog as i mentioned yesterday in the "introduce yourself" sub forum.For those that didn't see,my name is Steven and am 29 years old.I have been playing poker for around 7 years with good profits and win rate.I explained i have been playing on 888 and Pokerstars for the last 7 years due to routine and lazyness.On 888 i play up to NL100 & NL50 on Stars.With just the weekend majors thrown in to mix things up.Although the recent changes don't affect myself massively on Pokerstars as I have only ever achieved Platinum with all the kerfuffle and hassle,it has prompted a change of scenery untill things are much clearer.That being said I am enjoying my new home.:) Having spoke with live chat yesterday we decided the best option probably would be Paddy Power so there I will now call home for the forseeable. I deposited 500 this morning to get a feel of the software and the way it all works multi tabling etc before transferring my Bankroll from Stars. So far so good,I didnt get much done as it was a case of messing around with the software settings and getting my HUD up and running. All of which was spot on and I think we are ready for tomorrow.

So today like I say we started off setting the software up and played a mixture of Normal tables for the first 200 odd hands and the final 300 maybe was on the Speed variant.I will be playing only Normal cash tables for the obvious reasons of reads and dynamics but i thought id try everything today just for fun.

So my cash graph that will start my journey off is below and for the small sample we played I am going to definitely like the place. 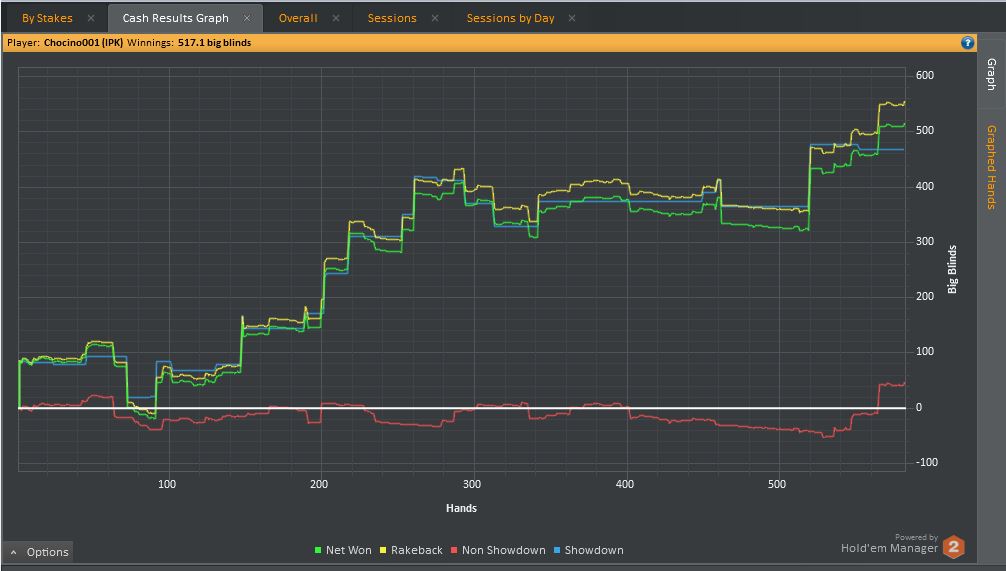 So a decent start to the site for myself.We also played two twisters to get a feel of them,and binked another 8 euro in two games.

On to tonight,My girlfriend is out so I cracked open a beer,stuck Channel 914 on and had a blast at my first Ipoker tournament.Like i said in my introduction i play cash for real funds and throw in tournaments with decent success. I entered the Prime to see what the crack was. 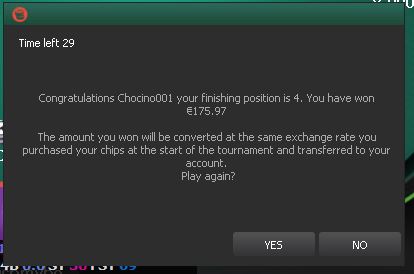 Not a bad first attempt,running JJ into AK and not holding.

So a decent first day shall we say and I think I'm going to like my new home especially when the RB starts coming in also.

So the reason for this blog/journey.Just so I have somewhere to document everything and see the progression made.

Aims : For 2015 just to relax for the next few weeks and take it steady to be honest,I've put alot of hours in over on Stars for the last 6 months and with it being a new site,I'll just be getting ready for a massive start to 2016 so will just be playing a few tables for now and tournaments over xmas without the seriousness.For 2016 and beyond, I want to be the MaxVIP by the end of 2016.I havent done the maths as yet but it should be comfortably doable.To have moved to NL200 by the end of 2016.So a good 12 months to get there.I also want to study as much as possible to freshen things up,learn new things so any strategy groups Skype groups I'll happily get involved.To get my little office finished,we have had an extension built and I got a small room added for me to hide away and get a new set up installed.So hopefully by March is my timeframe for that.

I'm sure I have forgotten thiings but I'll add as and when,or just Holla.

I stream quite alot of my play and tournament runs,so feel free to pop over and join me.

Sounds like a dream start to a new site which will hopefully be a sign of things to come.

I am also taking the chill at the end of 2015 route and then just gogogogo in 2016. I have grinded my arse off all year now i just want to sit back, relax, get fatter and then show 2016 what im made of.

6
Posted 4 years ago*
Hi Steven and welcome to you.

You play a bit higher and no doubt whatsoever better than I do and you seem to be doing well already on the new site. If you're keen to learn you have come to the right place, people here are very friendly and helpful; there're some of the best players at their limit on here to, so you won't lack for knowledge base that's for sure.

As for the rest of this year, I think many of us who've been busy all year are flagging a little and taking time out to recharge the batteries and ponder our next move for the new year. I for one will be ramping up my volume gamewise and studying even harder after a tough few weeks.
You said you streamed, I don't know much about it, but if you add your link here then I'm sure you'll get interested visitors.

Looking forward to seeing how hard you crush these games, so you have a great time here and we'll see you at nl200 very soon no doubt!

Don't forget to link in here and the forum https://www.pokervip.com/en/forum/general-discussion/follow-us-on-twitch?page=28when you are streaming so we can come and rail!