So MPN puts on a €3k gauranteed freeroll every Sunday that you can enter if you have played 100 raked hands during the course of the week prior. I hardly ever play tournies and only know the basics of tournament play and push/fold and all that good stuff.

So I entered today and played quite well and ran quite well. After a couple hours I was on the final table out of 1059 people and I was the chip leader. Shortly after I knocked 2 players out at the same time with QQvA4vAJ

I kept grinding and actually made it to heads up play. About 10 minutes into heads up and about 18bb deep I got 99 in the BB. BU opened to 2x. I opted to just jam it rather than than 3b it. Have no real clue if that is best. Guy called and had KJs. He hit a K on the river to take it down and I ended up with 2nd place.

Was a really fun time. I had my wife railing me and everything. Not bad for a tourney newb who plays 10nl(soon to be 20nl) cash games 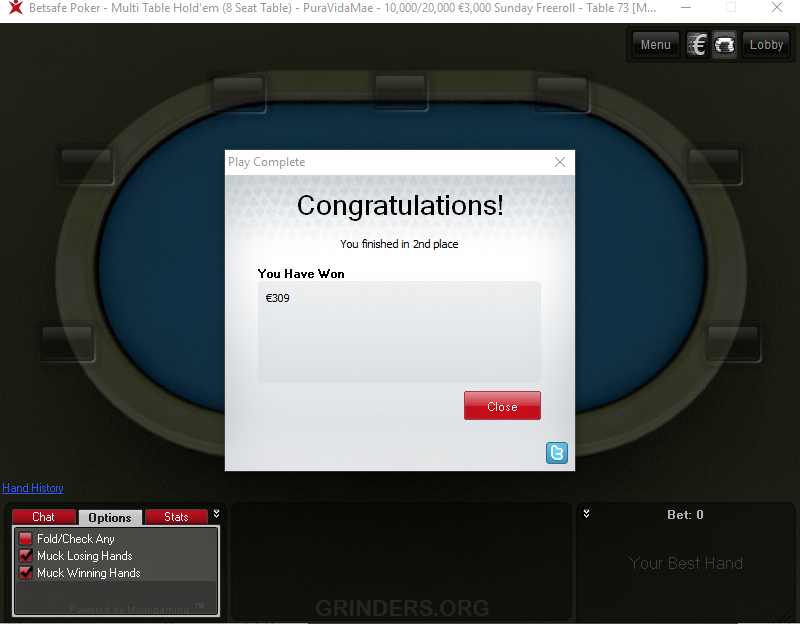 5
Posted 2 years ago
MBFN! BTW if you want some easy money hop in this event tonight. Password BP1 We organized it but is streamed on Twitch.TV/BParisPoker. Get involved!

As above, would be great for you to play in the BParis home game tonight, €250 added, so nearly a freeroll!