1
Posted 3 years ago
Hellooooo all!

I finally have an evening to myself. I did a tiny stream for just over an hour. I've had a good weekend. Had a couple of pints tonight too. Not too many though.
I had 2 gigs with the band. Both were fricking awesome. One was an outdoor gig in a local park that the council set up for a few bands to play each year. Over a thousand people turned up. Amazing weather and people could just bring their own booze and chill out. Then another gig the next night at a local pub... the atmosphere was so awesome for that. Then I worked earlier today and have the evening to myself. But there is also a mini festival on in my city which I went to for a little bit and had a couple of pints before my small stream tonight.

So it's been a fantastic weekend! Now I'm gonna finish a can or two and relax.

Gonna just post how things are going up till now in my grind. I'll stream again maybe on Tuesday as that will be my next day off.
Catch you later all!

1
Posted 3 years ago*
Had a couple of bad sessions and also been busy/away from home a lot the last week.

BR took a turn for the worse. Just two epically bad sessions where I couldn't win a showdown hand. I definitely wasn't hero calling light either. Just caught a couple of horrible swings in the sample so far. So no nl10 for me for a while which is fine. I also played a few tournies for a couple of bucks each which I failed to cash.

The final graph I show in this post was such a bad short session that I just stopped. I have hardly encountered such a short period of time where I couldn't win a hand in all the sessions I've played haha. So as I said, just took an early stoploss and chilled out with a tourney or two after it. It definitely feels weird how you can get periods where you do so badly all at once without changing a thing in your strategy. I don't tilt anymore with my play, as I don't care enough about the stakes firstly, and secondly I just like to have fun. But when you go for a long time without winning any hands, it does feel frustrating on a game level and I don't mind taking a break in those cases if the stream is quiet anyway.

I had a nice time in Liverpool with the better half and a couple of work buddies (one being the boss who we actually boss around most of the time). Was fantastic weather of course. Had some nice beers but not too many, and finished of with a spit roasted meal which was fantastic, at a place called Grilla.
Took a few shots today at my local GC driving range too giving me and my lady some sore hands. Just can't get enough of the weather though. 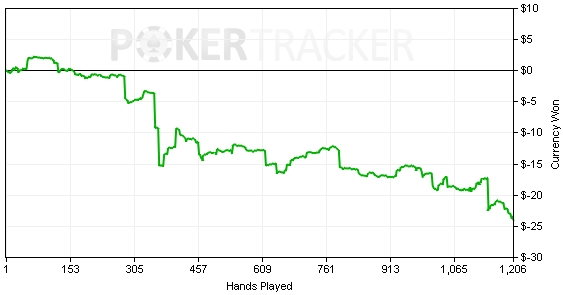 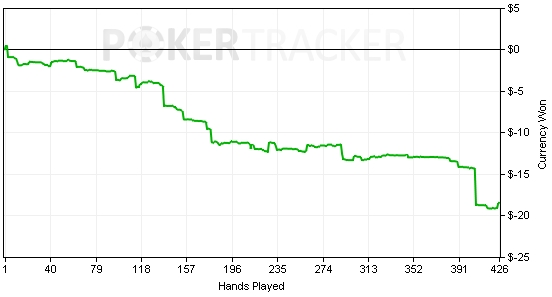 Posted 3 years ago
Yep we all know that feeling! Playing Omaha has taught me to just... let it go... so many times they just get there on the river and you either have to fold or have to call, so frustrating when you are just reloading and reloading, but taking breaks is deffo GTO, get it out the system, regroup and get back to it!

I never seem to be online when you, or dave, or flash is streaming but I will pop along sometime soon!

1
Posted 3 years ago*
Yeah for sure. Just keep going.

Yesterday I played cash reg tables, won just under a buyin and used the few dollars for tournies. I played 2 and cashed in both. One was just over min cash and other I came top 3 table out of 2.1k players. Only a $2 tourney for about $16.80 or so, wish I could have final tabled but hey. 1st place was about 580 or so, somewhere around that. Would have been nice.

1
Posted 3 years ago*
Mini update... not had much poker time at all in the last week or so.

Played once since my last post. Basically I went to see my bro and watch the world cup England game on Saturday just gone.
Got back pretty drunk and showed my bro the game for a laugh on his laptop. Played a bit of 5nlz, and then played some 10ploz. Won about $36, mostly at PLO because of the stakes and because I kept hitting the nuts. I'm probably gonna play a few tournaments when I can. Possibly tonight, if I'm not busy.

Posted 3 years ago
Winning when drunk is always good! Too easy to wake up to no bankroll

1
Posted 3 years ago
AshVIP: Winning when drunk is always good! Too easy to wake up to no bankroll :D

My roll is near the peak of where it was before the downswing. Played PLO5 mainly but isn't tracked.
Looking to get on to GG Poker!

Posted 3 years ago
Are you signed up to GG already?
Grocker6

1
Posted 3 years ago*
AshVIP: Are you signed up to GG already?

Yeah I signed up yesterday. Took my money out of Stars, so give it a couple of days and I'll deposit on GG and play Omaha vs those who don't know the rules. I had to send photos of documents of my proof of ID and all that though and have just had it all approved for the go.

Posted 3 years ago
Ah cool, did you sign up with PokerVIP? PM me your username if so and I'll make sure your account is tracked correctly etc
Grocker6

1
Posted 3 years ago
AshVIP: Ah cool, did you sign up with PokerVIP? PM me your username if so and I'll make sure your account is tracked correctly etc

Yeah I clicked through the link from PokerVIP.

Posted 3 years ago
How are you doing on GG? I've been playing PLO on Stars, and doing pretty damn well at the minute I must say, it's been a very nice couple of weeks!
Grocker6

1
Posted 3 years ago
AshVIP: How are you doing on GG? I've been playing PLO on Stars, and doing pretty damn well at the minute I must say, it's been a very nice couple of weeks!

GG is fun and I've been doing pretty well so far. Just on a busy week, so won't get much poker in till next week maybe.

3
Posted 3 years ago
GG is a good site shame when you withdraw to Skrill etc the fee is not cheap, need to keep that in mind.
Grocker6

1
Posted 3 years ago
A little update on things.
I haven't played much in the last week or so. Just been busy making money the boring way.

Our pub had a beer festival this BH weekend just gone, it's an annual occurrence and although fun... it's also tiresome and relentless.
So I'm glad to have a bit of time for quiet by myself. Gonna boost my roll to about $645 or so and continue playing 10nl until I build a fair bit over 700 to feel comfortable taking some 25nl shots. The games won't really change in difficulty, but mentally I want to be prepared for the swings. I'll put in some proper streams as well (which means less of the silly 1 hour or so streams) on GG. Also it'll be nice to play with such a large number of buyins behind me. It'll feel a lot more fun.

Hopefully I can build a decent enough life roll by the end of the year to help for a well needed holiday for me and the better half. And have enough left to grind comfortably. We're planning for about May so it shouldn't be a problem at all. I'm most of the way there anyway and with working/gigging the rest of the year and hopefully winning a bit, it should be an easy process.

Also I need to put some more study in and get myself on top of my game, hopefully I stay motivated!

Outside of that, got a couple of fun weekends coming up. Playing a beer festival gig in Keswick with the band in a place surrounded by mountains, we get free accommodation too so it'll be a bit of a piss-up affair as well! And also a work night out in a couple of weeks. We might even hit a club, which I haven't done in years now... growing old huh?

1
Posted 3 years ago
Played a good days worth yesterday. I often go on a poker binge when I haven't had much time to play.
Ended close to +5 buyins. And won a couple in the last few days too. And that's even with me goofing around with some shortstackers, making a few call-offs I shouldn't for the shits and giggles for a dollar or so hah. Needless to say I ran fairly well and they often showed up with way worse than expected.

Have around 72.5 buyins behind right now. I like having a lot behind. GG is a pretty fun site to play on. There aren't many I've played on that manage to keep the fun and interest factor like GG.

Ok well that'll do for my mini update.
Seeya around all!

Posted 3 years ago
Sounds like it's going well on GG, good job! Hope to catch you next time you're streaming, always good to have a very nice buy-in bumper behind you! Tempted to jump up?
Grocker6

1
Posted 3 years ago
I'm semi tempted of course but I'm happy to stick where I am until I'm happy with taking a swing. I don't have 30bi yet even for 25nl and I want at least that before I consider it. Hopefully if I run and do well enough then it won't be far off.
Grocker6

Had a great weekend just gone. I haven't played poker since maybe Thursday because I worked Friday and then had a weekend away with the band in the Lake District for a beer festival in the mountains. Needless to say I had a fair few ales and felt a bit rough coming home yesterday. We rented a van and at least it wasn't me driving so I could close my eyes for some of the journey home. Here's a quick shot of us playing. And a shot with the better half. 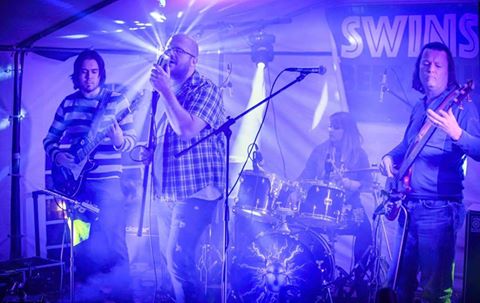 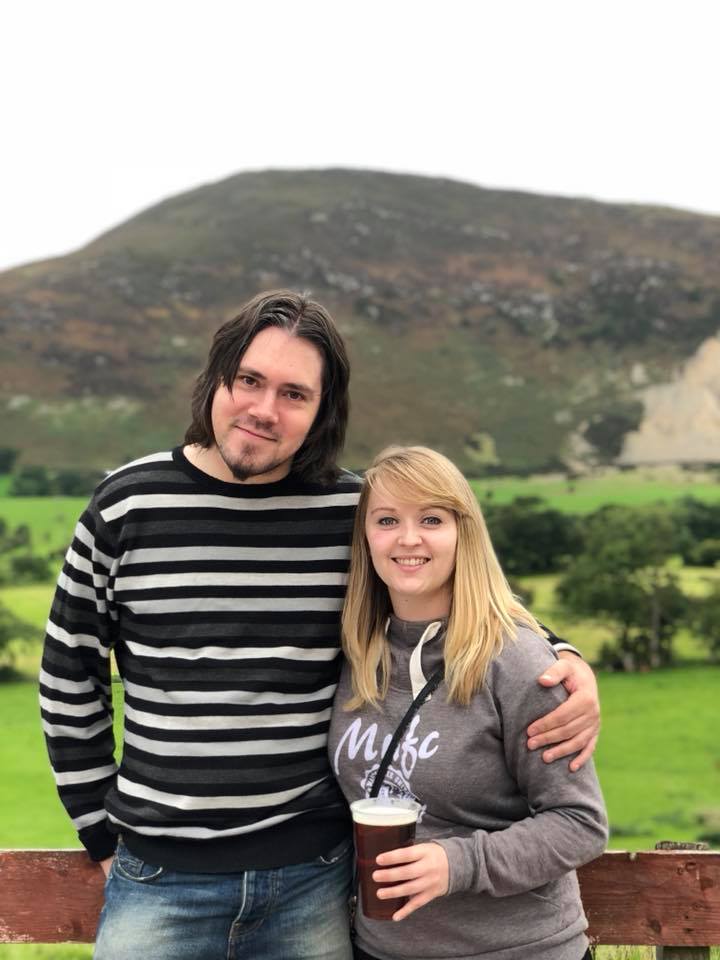 Ok well poker-wise I played 2 sessions today,
about 6 hours worth of a grind in total.

First session I broke even, made some bluffs but got called. But I was proud of my bluffs because the hands I aimed at were exactly what they had in the big pots. I put max pressure on but they chose the call button. Second session I made about 3 buyins overall. My bluffs were more successful and I got a set vs AA in 3bet pot which is usually a nice result.

I felt like even though I got some calls vs my big bluffs, I was happy with them. I'm so much more fierce than I used to be but I think I'm selecting the spots well and I had great reads on what my target fold hands were.

Posted 3 years ago
Nice couple! Didn't realise your missus was in the band as well, sweet! Sounds like a top weekend, whereabouts in the lakes was it?
Create An Account
Sign Up to join the conversation.Sign In
Already have an account? Sign in.