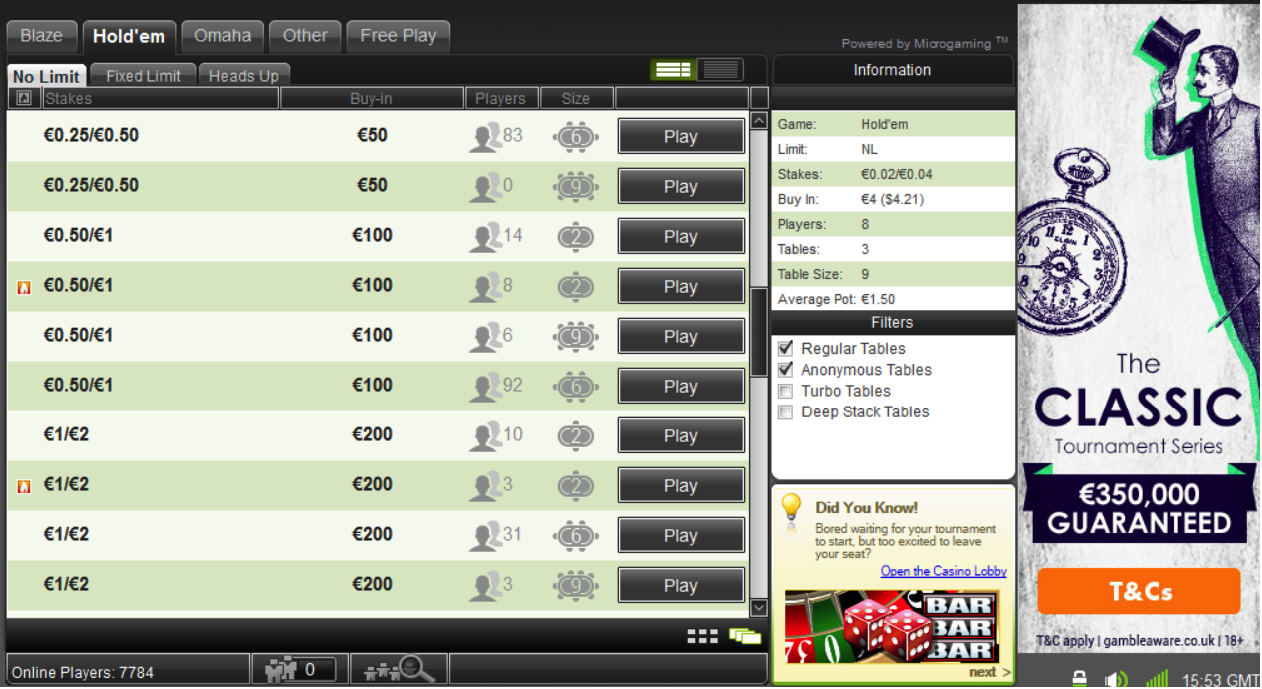 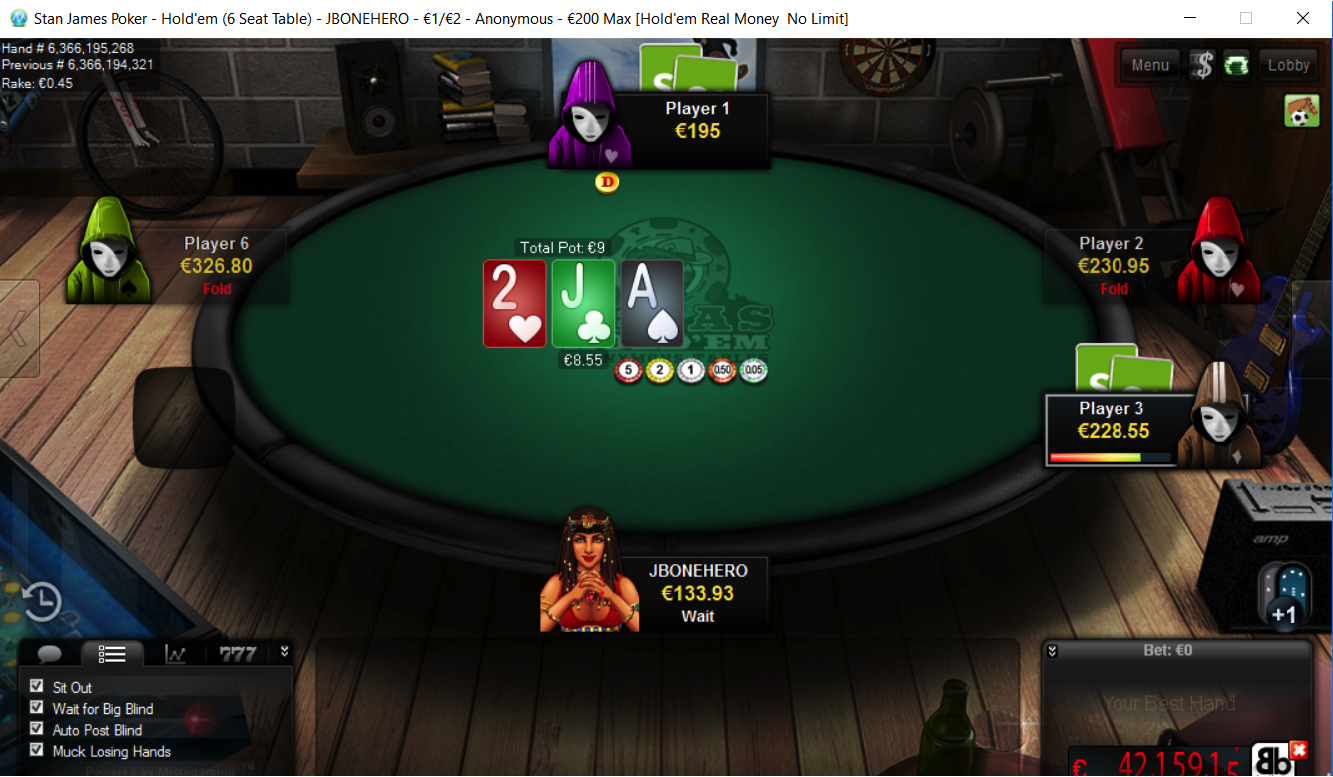 I have long advised if I should write a commentary here... First - really soft side.... Playing is good. But now the second - Have totally problems with their software and their support ... Not all hands will exported to my harddrive (only round about 75 %). 25 % of my played hands will not exported (after 5 weeks of Play) so it´s not Possible to analyse game right and the worst is that because of this winnings will not shown right. After trying to clarify with their support only the same .... (pls write us an e-mail that we can look what the Problem is - and after waiting always the same answer - "We can not see that there is a Problem and also Answer from Network there is no Problem") But definitly it is. So Support tries to help but absolutly unable if there is a real Problem like mine. Bonus is good and Rakebackdeal also. Because of no Professional work possible (analyse impossible and support unable with real Problems) only 2 Stars

Very happy with this site. Software is solid, support is good. Rakeback is good, especially combined with the rakeraces. The only thing that bothers me is that the poker account has to have $ as its currency, even though games are in €, which results in exchange fees when depositing or withdrawing.

NL20-NL50 player here. The skin itself is good, support is good, rakeback is good, rakerace is good, software is good. NL20: regfest but they are easy to beat, plenty of fishes NL50: regfest, not so many fishes, 3bet/4bet/5bet wars all over the place, I think it's even worse than Pokerstars. And since the problem is most of the action goes to the anonymous tables you don't know who are you up against. If you want a less stressful site then this is not yours.

StanJames is one of the best poker sites I have ever played on. The games are super soft, however that is standard for Microgaming overall. It is probably due to anonymous tables, where you can literally swim in fish. The rake/bonus side is also great, especially after recent cuts in rake taken. For me it meant almost 2.5bb raise in winrate. When you count in bonuses, rakeback and the race there's probably no better site to play on at the moment. One thing I was scared about was the time that I could withdrawn my money, as I had bad experiences with other sites before, however withdrawn on this site is one of the fastest I have ever had. Overall, if you are truly about make +EV decisions, playing on StanJames is definitely one of them.

I joined Stanjames as a new poker player who had moved his bankroll off from Partypoker after clearing my deposit bonus period there. I play primarily 6max NLHE at micro stakes 2 and 4NL, so these are what I can review. Positives: - The games are soft. Not as a soft as 888 or Partypoker, but even with lazy table selection you can be sitting with at least 1-2 fish at 6max tables. - There is always tonnes of traffic in the microgaming network, it can peak at around 14k people online and even in terrible hours the traffic won't drop below 4.5k - The exclusive rake races are awesome, there is a real opportunity to gain decent rakeback in semi-competitive races before you get your flat rakeback from the site and from the Pokervip exclusive race. - For those prone to tilting at higher stakes than their bankroll, Stanjames have an awesome tiltbuster feature where you can ask the support staff to lock your account from playing at higher stakes than you can afford. This has been a bankroll saver for me many times! - The support is amazing, the live chat will get you in touch with someone within 30 seconds and they are super helpful. - The new software is awesome. Super smooth and looks great! - The 30% rakeback system is great, you can clear it instantly every time you generate even 1$ in rakeback. One of the best systems for rakeback you'll find. Negatives: - No traffic for speed games past 2NL. This is a big downside for a lot of people and also why I've chosen to give it 4 stars. However if you're someone who prefers not to play speed anyway, this shouldn't affect you at all. - Lack of traffic for SnGs. Despite the lucrative SnG exclusive rake race, you won't be able to get in the kind of multi-tabling you need to make a decent hourly from SnGs here. Although they are super super soft. Nevertheless, Stanjames are doing more and more promos to change this so I'm optimistic about the state of SnGs here for the future. - Lack of cool satellite tournies, this might be an issue if you like playing satellites for live events. There simply aren't enough entrants for most of these to even start the tournament. Overall, despite the lack of speed, I think that Stanjames is one of the best places for 6max NLHE cashgame players to be at right now. I certainly will be playing here for the foreseeable future.

I played last month on Stan James and I must say, that site is great, if you are mid stakes or micro stakes player there is plenty of games running around clock, and top of that you get good rakeback deal combined with rakerace returns to make this site easily number one choice. Those are still not the reason, why you should register to StanJames main reason is that customer service is great never had any problems when needed to ask help from customer service and cash out times have been good always. So why the F*** are you still reading reviews go start playing and win big and get treated like royal from great customer services.

I used to play a lot on StanJames and if there's one thing this poker room has going for it it's definitely the amazing, competent, highly knowledgeable support. Probably the best out of every poker room I've ever played on. Other than that StanJames deal is really good so if you're tired of pointless conversations with poorly trained poker room support members StanJames is definitely a place for you.