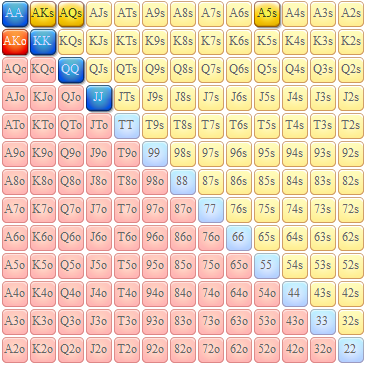 Having looked at the openers stats I might 3bet a little wider but the above I think is standard.

Facing the small cold 4bet from a player with only 45bb, should we have a calling range?

We need 25% to call, and vs a range of JJ+ and AK, all of these hands have the price. So should we have any folds?

2
Posted 2 years ago
Folding A5, shoving the rest of your range against this guy. Wouldn't overthink this situation too much. Plenty of crazy guys and it can never be bad to get AQ/AK/JJ+ in vs a 45BB'er...
AshVIP

Posted 2 years ago
I'm assuming that's your actual range not perceived range? Seems too super tight for either
fergrberger

Posted 2 years ago
That is an awfully tight threebetting range. 4 bluff combos?
thetallpaul

2
Posted 2 years ago
3betting JJ in CO vs UTG open is now considered tight? I've not played in a while so maybe the game has moved on. Or is it just the lack of bluff? I'm flatting a fair chunk of that range vs UTG as default. QQ-JJ, AQ+ probably at least some portion.

Posted 2 years ago
I think it is more the lack of bluffs. There is not really anything wrong with the range that you are playing

@thetallpaul It is a pretty standard polarized range COvUT. It will still work but there are a couple things that I have started to pick up on that I don't like about it. I used to play a very similar 3b range from COvUT. Basically KK+ maybe some AKs for value and then all A5s and a few combos of some KQo and AJo for blockers.

Here are the 2 issues that I have found with it. I have personally found that a lot of players in today's games don't fold nearly as much as they used to 3bets. The whole idea of a polarized range is that you choose hands to bluff with that are slightly too weak to call with and play profitably. They become profitable in that they get folds preflop. If your opponents aren't folding enough preflop and you are having to take them postflop in an inflated pot it kind of sucks.

The second issue is today's games are a lot more aggressive. Typically with a polarized 3bet range, that means you are defending your CO with a fair bit of calls. Maybe like 88-QQ, ATs-AQs, AQo KJs, KQs QJs JTs T9s something like that, maybe slightly tigher wider. You have 3 people behind you that in today's games are all going to be squeezing a lot more to pick up dead money and some of the squeeze sizes are getting pretty sizable, making it very difficult to defend as the cold caller versus a squeeze.

So the response to those things is to 3bet more depolarized. You just 3bet more hands for value and the hands that you use as bluffs tend to be more playable hands that can flop well and make nutted hands. Some guys at the higher stakes will now opt to play a 3bet only strat IP from MP/CO/BU. Its pretty extreme. The thing is you will actually find that versus a reasonable range that calls your 3b, hands like QQ JJ AK all have >50% equity. Even TT has more than 50% equity versus a range that calls a 3bet and AQs is kind of right on the edge. It just sucks if you get 4b. You will eventually be forced to defend some of those hands and things will get dicey postflop.

So I think ultimately the challenge with that range is doesn't have enough bluffs. Technically the JJ+ AK is all for "value" so that is like 30 combos of value and only 5 combos of bluffs. So he probably needs A5s-A2s then some stuff like ATs, KJs, QJs JTs T9s Some stuff like that to balance it out, just all more playable stuff postflop versus AJo or KQo