Online Poker has been a contentious topic of discussion since around 1990 when the first virtual poker rooms started popping up.

Since technology has made it even easier to play longer, more accurately, and have a much more enjoyable experience – both visually and community-wise– online poker and online gaming, in general, has blown up around the world. But, the United States and state government/s loves to get involved with anything and everything that has anything to do with money.

If they can’t find an easy way to take most of that money, they love to ruin everyone else’s fun by outlawing in. Like a spoiled kid, if they can’t have it, no one can.

But things are coming around. The US Supreme Court ruled in favor of sports betting in 2018 opening the door for online gaming in general. Now there are four states that offer full-scale sports betting and even legal online poker play: Nevada, New Jersey, Delaware, and Pennsylvania. There are tons more that are already up and running to some degree, such as at tribal casinos or in certain areas, and will likely be full-scale in the near future – states such as Oregon, Mississippi, and New Hampshire. There are even more that have already passed bills but are just not yet legally up and running and there are even more who have submitted new legislation and are actively pursuing the legalization of state-sanctioned gambling.

This doesn’t just affect the best online sportsbooks, but poker and online casinos as well. Why? Because it has put gambling back in the spotlight on a national level and has provoked a lot of talk about the Wire Act.

So, whether you a Dem. or a Rep. if you favor online gambling or poker, you are probably not a fan of what the Trump administration has done in their reversal of the Wire Act. Essentially, online gaming has gotten more and more regulated. And all of the progress that has been made with regards to states making their own decisions with regards to gambling, whether it be in a land-based facility or online is in danger of unraveling.

So, how does the presidency come into play? 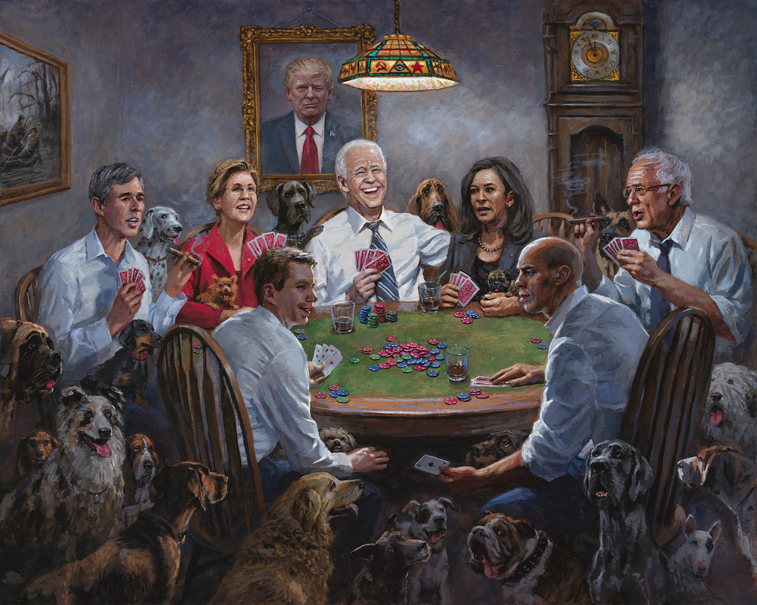 Well, there are three top Democratic candidates. Donald Trump is the hands-down, clear favorite to win the Republican nomination, but on the Democrat side, things are not as clear. We have Joe Biden, Bernie Sanders, and Elizabeth Warren all as odds-on front-runners, and even Buttigieg hanging in there for the time being.  So, what are the top three democrats’ stance on online gambling –which would include online poker under its umbrella?

Although Elizabeth Warren would not publicly come out and support or condemn the current administration’s handling of the Wire Act, she did say that she doesn’t feel that there is a need for further regulation. That said, she made comparisons of online gambling and poker to Pay Day Loans. OK … so, that’s a passive way of saying she freaking hates it and it makes her really nervous. So, those of us who depend on the online gaming industry for our lifestyle and living can pretty much count out Elizabeth Warren as a presidential candidate that will advocate for the industry.

Bernie Sanders is even more enigmatic when it comes to online gambling. One year he seems to support legislation that is pro gaming, and others he supports laws that actively tear it down. He has also come out and said that his mind is not made up on the matter … which is funny because he’s had 30 years to think about it. So, Bernie may not be as openly against it as Warren, who has proven that she is no fan, but he is an X-factor.

Joe Biden was recently at a Union Workers assembly in Las Vegas and he said that he would actively reverse the current administration of the reversal of the Wire Act and that he does not believe that online gambling needs any more regulation. So, Joe Biden probably just wants to be able to bet on Syracuse games from the privacy of the White House and play some No-Limit Hold’em.

Sure, there are other significant factors to consider when deciding on who you are going to vote for. But if your livelihood is tied to online poker and gaming, then Joe Biden might be the candidate you want to back, as it could have a direct impact on your daily life.

Could Asia Be The Key To The Re-Birth Of Online Poker?

Is LeoVegas Casino Really Worth the Hype it Gets?

Robert Campbell Picks the Second WSOP Bracelet. Will He Become the Dominant Force of this Poker Season?

In the Ever-Changing World of Online Poker, How Do You Find Your Next Poker Site?