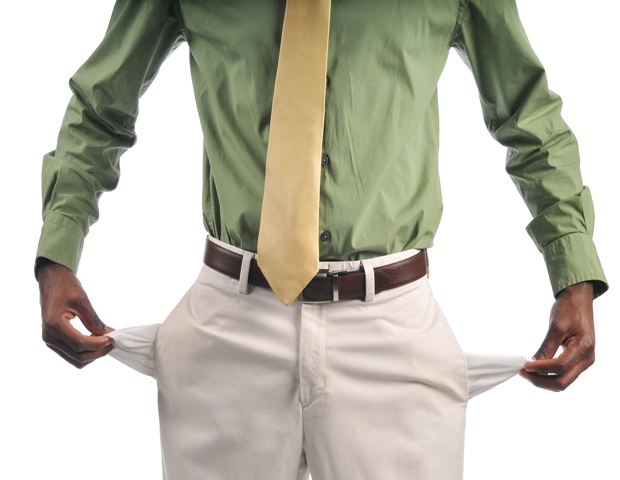 First of all - If you've gone broke, you're not alone. Going broke is something that has happened to many poker players! Some lack control, some can’t resist the pit games, some play too high, some run bad and some players are just not good enough.

Nobody deserves to go from having everything to nothing, but it does happen and if it hasn't happened to yourself then it will have happened to someone you know.

Rumors spread around the poker community like wildfire, and some sad individuals get off on hearing that someone else has gone broke. They obsess over other's misfortune. It sounds cliche but you must ignore the haters - their hate comes mainly from jealousy as they don't like the fact someone has succeeded more than themselves and human nature can make people enjoy watching people's demise more so than their success.

For the players who lack control and spend their winnings lavishly, expecting the money printer to keep on printing, you need to look into savings or find a way to protect your money. This could be something like a simple savings account or ISA for investing in markets or gold. Putting money aside for a rainy day helps any human.

Putting aside 10% of profits per month can start us off again if we lose everything. Yes it might mean dropping down in stakes but it's better than nothing, and like most adults we have bills, rent and families to support so this could buy us some time whilst looking for backing or even changing our career. Don't be the guy who has it all, loses it all and becomes depressed with no hope. Always have a back up plan!

Keep away from the pit games! These are simply not profitable and cost us money. Yes we have all had a huge winning spin of roulette or heard of a mate winning it all, but remember, Vegas was built from gamblers! Its a solid loss. There is no EV, no longterm strategy and something most poker players do when on tilt or drunk.

Ban yourself from online casinos, hide the links and tell pit bosses to keep you out! All of these things can be done by a click of a button, email or letter. Not even having the choice to do this is profitable. Have self control and when your mates are doing their brains in on the wheel sit in the bar, reward yourself with a beer for a good grind or think/discuss hands with fellow pros!

Playing outside of our bankrolls is a major no unless you are very strict with it. I say this as you might decide to risk 10% of your bankroll on a shot everytime you hit a certain point. Doing things like this is fine provided  you have the control not to break the 10% rule. We all want to play the nosebleeds but we also all want to score a penalty for England.

Very few players reach the top like this so be happy where you are and realise that with hard work and dedication you might excel. Putting your full roll on a table just to say you have played there is not a good idea! Work harder than the next guy and play there when its your time.

Running bad is sadly something we cannot control. We have softwares that can make us realise if we are losing because of bad play or variance. When this is happening you have to play through it. Taking a day away from the tables does not change variance. However playing more hands does.

For example to reduce variance to near its correct state in nlh6max you would have to play 200k hands per month. So looking at this over a year you really have to be prepared for some downswings and bad streaks. I do advise you however to take a break if you are playing poorly due to running bad. Its hard not to and being human we suffer from emotions.

Not being good enough is a tough thing to admit. Sadly most of us are not. It's difficult to admit our downfall's - this is true of anything in life. It's especially true in such an independent game where we are in control of every move we make, and this makes it even tougher to walk away from. We may find ourselves great at cash games but the worst at MTTs, however we want the glory of winning titles so we chase those losing money endeavours rather than making the consistent but smaller amounts of money on the cash tables. Play what makes you the most, stick to it and let the money roll in.

Listening to other poker players

A lot of poker players will brag their wins 24/7, ego can do this and we find ourselves thinking “well this idiot is winning it all then so can i”. The secret is ofcourse no one talks about their losses as much as they do their wins. So try not to take too much notice in this and just concentrate on your own game.

Going broke does not mean its the end of your career, taking up short or long term staking could be the perfect option. If you have a reputation, stats or proof that you can return profit you will be snapped up. This could be something you do to earn back a bankroll to go it alone or something you do for a lifetime.

Staking means you never have your own money in play and probably have certain controls put on your account which means you cant make the same mistakes twice or doing anything stupid. Take your time and find the staking that is right for you. A lot of staking deals will contain poker coaching or being part of a group which could be exactly what you need to power yourself forward to becoming the best possible player you can be.

This is the hardest thing to do in life. If you are struggling with your game, have an addiction or have done something stupid then tell someone. Even if you just ring gamblers anonymous and get it off your chest this will help you. Addictions can be cured with help but you need to be honest about it. Telling your family and friends should be the first step...especially if you share financial responsibility with them.

If you are just struggling to beat the games then hire a coach or do extra off the felt work such as reading up on it or doing database analysis. This is the boring stuff or might cost you money. But treating poker like a business should allow you to realise that sometimes you might have to invest to then make more in the future.

There is nothing more lonely than going broke and watching everyone vanish. This is sadly the truth and its down to various reasons. Some friends were just there for the ride, some friends you lose touch with as you dont travel to events with them anymore or your personality changes. Its hard not to be down all the time and some people just dont want to hear it. If you are friends with someone and you see them going through a rough patch do something to help them.

Even just taking them for a pint to talk to now and then will perk them up and make them feel that they are not alone. Also reaching out to them if you think they will be profitable could be a great opportunity for you to make money. Also when you see your mate wasting his talent away in the pits tell them the effects of it and why they should stop doing it.