Facing a Flop Raise in Poker

How to deal with a situation where our flop bet is raised? There is no one answer to this question, and so much will depend on the limits you play, general tendencies of the your opponents (population reads) as well as specific reads and stats of a villain. The advice contained in here should give you a good general idea about different situations.

It's a common situation, we fire a bet on the flop and get raised. Should we continue or should we give our opponent credit and fold? In some cases, especially at the lower limits it may feel like we are folding all of the time and have a leak. But is this really the case?

Initially we need to establish the exact situation we are facing because not all flop raises are the same.

The first relevant factor are the positions of the players involved. Assuming we are the open-raiser, the earlier the position we are in, the tighter our opponents cold-calling range is likely to be. We are perceived as stronger when we open in early and are less likely to be raised or check/raised.
It's not impossible we will be bluff-raised on the flop after opening from EP or MP, but most players have a tendency to bluff more when we open from BTN, CO, SB. Our opening range is wider which often leads to more aggression from our opponent.

So far we have primarily been referring to single-raised pots. Bluff-raises can occur in any situation though. 3bet pots, 4bet pots etc. For the most part it seems the average player is less inclined to have a bluff-raising range in 3bet or 4bet pots compared to their propensity to bluff in single-raised or limped pots. For the majority of players there is a point where the pot is large enough that they will start to play the game honestly based on the strength of their holding. As a rough guide, the more bloated the pot preflop, the less we should expect bluff-raises postflop. This rule wont apply to all players though, as soon as we have specific reads we can start making a judgement on a player-by-player basis.

A player does not necessarily have to be the cold-caller preflop and face a flop c-bet in order to bluff-raise the flop. They might actually be the preflop aggressor, decide to skip their cbet OOP and go for a check/raise. In reality good players should be doing this almost as often as they check/raise as the cold-caller. In practice this simply doesn't happen. The vast majority of players are not at the level where they think about check/raise bluffing as the PFR.
If they want to bluff in this situation they will generally just fire a cbet. So check/raises from the PFR are rare overall and generally represent nutted holdings. Players are often far more creative with strong value-hands than they are with bluffs. So usually if we see a player taking a strange unorthodox line, it's slightly more likely they are getting tricky with a value-hand as opposed to bluffing.

It's hopefully easy to see

why this could have a large impact on the correct decision when facing a raise. If our opponent has a very shallow stack it might be impossible to continue with certain draws which we have the correct implied-odds to call if our opponent had a deep stack. Conversely it might be reasonably straight-forward to continue with an overpair vs a shallow-stacked opponent, which we might consider folding if our opponent was deep and we hence suffered from reverse implied-odds.
We need to weigh up all of these factors simultaneously if we want to gauge the strength of a flop raise from an unknown.
For example imagine UTG opens, MP 3bets, CO calls, UTG calls, the rest fold. UTG checks, MP bets, CO calls, UTG check/raises. UTG ticks a ton of the boxes for being super strong here. He opens in early, it's a 3bet pot, the flop is multi-way. We should be able to make some big laydowns in this situation.
Now imagine BTN opens, BB calls. BTN cbets and BB check/raises. We have no reason to necessarily think an unknown is super strong (more on this later). We are probably continuing with at least top-pair+ maybe even some back-door draws depending on our exact estimation of villain's range.

Or imagine a guy who only calls PP's preflop. Should we assume that he is good/aggressive/balanced if he raises flop 12% of the time. Not at all, remember that we flop a set 12.5% of the time. He can easily reach 12% without ever bluffing if he doesn't understand how to play his sets on different board textures.
We should also make use of the following advanced statistics to help us with our flop decision.
The first two stats here consider future play and help us to make an exploitative decision based on this. If our opponent's have a tendency to continue firing after they raise the flop we should generally be continuing with a tighter range on the flop. If they have tendency to check turn after they raise the flop we can often defend with a wider range knowing that we are either going to get a free card more often or the opportunity to take down the pot more often after our opponent checks.
The final stat there shows how often our opponent folds to 3bets. If this is sufficiently high we can consider turning some of our draws/back-door-draws into 3bet bluffs.

Ideally we shouldn't be 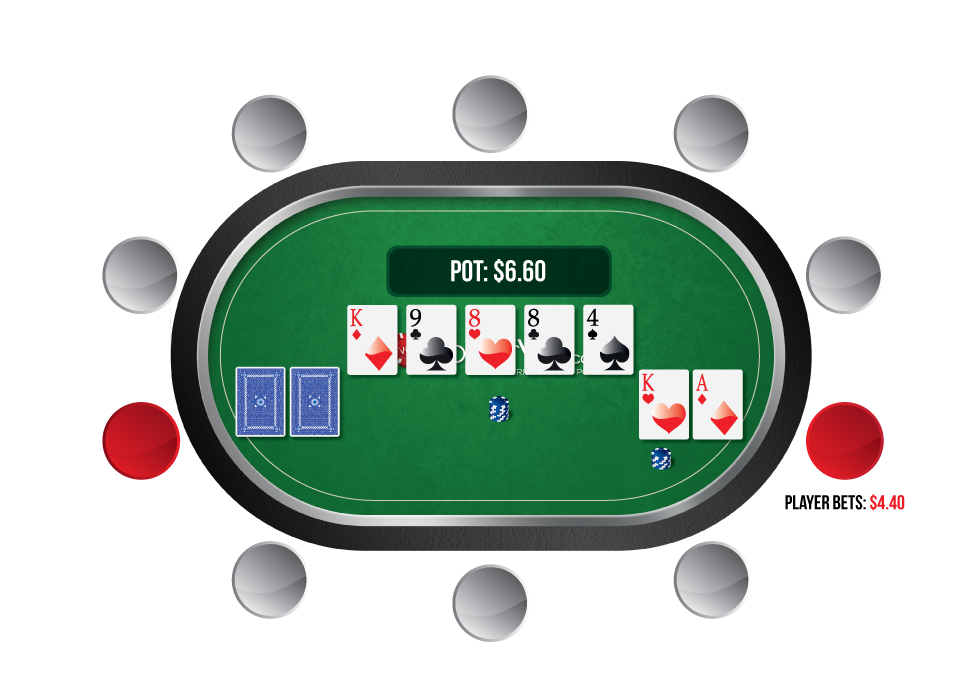 folding more than about 50% of the time to a regular-sized flop-raise. However population tendencies can influence the correct value of this stat. As a rough trend players are less inclined to bluff flops the lower in limits we go. At higher limits the majority of the population is aware that we should be bluffing flops aggressively. At micro-limits there are plenty of players who never bluff-raise flops and only raise with something decent.
If we know our opponent is never bluffing then we'd obviously play quite tightly facing a raise. Our fold-cbet-to-raise could end up being in the 60% region. We described a situation earlier where we opened on the BTN and got check/raised. We mentioned that we have no reason to believe our opponent is that strong. We should still approach the situation with a measure of caution at lower limits however, perhaps he is one of these players that simply does not bluff-raise flops.

So we have run into a player who appears to be raising flops aggressively with a balanced range. What will our continuing range look like.
1.Calling
2. Raising
At higher limits we can jump straight into this defending mode by default. At lower limits we can essentially just cut out all back-door draws without a decent read that our opponent is playing aggressively. 3bet bluffing is also going to be less effective in general at lower limits since the average flop-raising range is much stronger.