With some of the World's most aggressive and popular high stakes players such as Isildur1 utilizing the river overbet, it's inevitably become a popular play - But how & when should you consider using it? 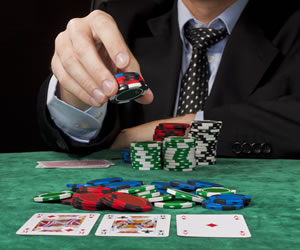 become a more popular trend since players like Durrrr and Isildur1 have shown it to be a way to put immense pressure on your opponents. This play certainly does not need to be relegated to the higher stakes and/or heads-up as it can be extremely effective in any No-Limit game. The key to developing a solid over-betting range is to understand the reasoning behind it.

The main variables that affect your ability to over-bet are your credibility and the way that your opponent approaches the game. Whether you should look to over-bet for value or as a bluff primarily depends on these two factors. Although it is possible to over-bet any street, this play usually only happens on the river and that will be the focus on this article.

Over-betting the river in poker for value

This play doesn’t necessarily need to be reserved for your monster hands, like a set or better, and can often be used with hands as wide as top pair!

Consider a hand like AK on a board of k5228 when this type of opponent flats the flop and turn; an over-bet will be far more profitable than the standard ¾ pot size bet. The reasons that an over-bet is so valuable in this situation is due to the opponents hand range and his likelihood of being able to make a big laydown. After flatting the flop and the turn his hand range will be heavily weighted towards top pair, and it will be extremely difficult for him to have anything that beats AK.

Once you can establish this dynamic it will be very easy to pull off some sick bluffs that will screw your opponents head straight into the ground!

Over-betting the river as a bluff

Based on how your opponent approaches the game and perceives your style of play should determine if it is best to over-bet as a bluff or for value. Regardless of the dynamic there will always be a situation that merits an over-bet opposed to the more standard bet sizes.

Using your image to your advantage

Only after showing down some wide value hands should you be looking to over-bet as a bluff and this should still only be done with caution.

Another additional poker skillset in my arsenal. Thank you.

Interesting article, i think like you said the most important thing too know yuor opponents too create your an image before using it as bluff bet thanks for the article greating

The over bet is a great tool to add to my poker tools! Thanks much much!

Another great article im starting to really love this site keep up the great work and keep them coming :)

Wow solid article, thanks a million have really enjoyed this one :)

One of my personal favorite plays. Confusing my opponent and making them make the wrong move is very fun. Although it sure can suck if they have the nuts!