What is Bluffing and when should you bluff? 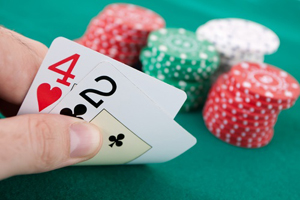 In Texas Hold Em, The goal of a “bluff” is to get your opponent to fold a hand better than yours. Any time your opponent folds a hand that would normally win, you've made a profitable bluff.

It's possible to beat the lower limits in poker without ever bluffing – just waiting for strong hands and value-betting. As you climb the limits and face tougher opponents, bluffing becomes a necessary part of the game. If you only ever bet when you have strong hands you will start to become predictable.

Even if you don't need to bluff in certain games, a selection of well-timed bluffs can have a nice impact on your win-rate. To benefit the most from this article it will help to have read the articles“What are Ranges?” and “TAG approach”.

Who should you Bluff?

Our first rule is therefore that we don't want to bluff calling-stations or huge fish. We want to target players that are capable of folding made hands if they think they are beat. These will be players who are better than your average fish and understand what types of hands you are representing with your bets.

In theory, loose players will be better targets to bluff than tight players, but this is only true if they are capable of hand reading reasonably well. Assuming they are playing a very solid LAG (loose-aggressive) style they will be excellent targets – their ranges are wide, and they can lay down a huge chunk of that range when you represent an even stronger one.

The majority of “loose” players in today’s games are usually fish however, not competent LAGs. In practice your best targets to bluff will likely be those with TAG looking stats who appear to have at least a basic idea about what they are doing. Nits can also be good targets for bluffs, but should you face any resistance you should stop betting with all but the strongest of hands.

When should you Bluff?

Assuming we’ve found a player who is capable of making good folds; lets lay down some rules for when it’s a good spot to bluff.

2) Bluff with the Worst Hand

For a bluff to be profitable we want our opponent to fold a better hand. If our opponent folds a worse hand we don’t usually gain anything. It’s a good idea to pick hands you are almost certain aren’t the best hand. You might get to the river with 5-high after your straight-draw misses and fire a bluff knowing your hand is never good. If you were to get to the river with second pair, your hand might be good and there is no reason to “turn it into a bluff” unless you strongly believe your hand isn’t the best.

On any street before the river it can be a good idea to pick hands with equity in the form of draws. You might bluff with a 6-high flush draw on the turn. You know your 6-high is never good but you still have a shot at making your flush. (This is known as a “semi-bluff”, see the articles on semi-bluffs for more information.)

3) What are you Representing?

Against weaker opponents you might not need to think about this last one so much. The most important thing is whether their range is weak/strong and whether they will fold or not!

Against better players you need to think about what range of hands you are representing. In other words, imagine you are your opponent putting you on a range. What kind of range would he give you? You need to bluff in spots where it’s likely you can have a strong hand. You will need to think about your bet-sizing also. In some situations your opponent may know you have a weak range, so when you start betting big it looks suspicious.

The first thing to notice is our opponent does not c-bet the flop. It’s unlikely our opponent has a king. It’s possible he could have a weak made hand such as any pocket pair below a king or a 7x. It’s also possible he completely missed the flop and doesn’t want to continue. It’s true our opponent may be slow-playing a K or better, but overall his range is very weak. Coupled with the fact that we have 6-high (almost never the best hand) it’s a good spot to put in a bluff.

When our opponent calls and checks the turn to us again it’s less likely he has complete air. He probably has a pair below a King. We could choose to give up knowing our opponent has a made hand, but since we expect his range to still be quite weak in general, it’s a good spot to keep bluffing. The 4 is an excellent turn card because it gives us outs to improve even if our bluff doesn’t work. We can also think about bluffing various rivers if we miss.

Many people associate the concept of bluffing with huge all-in bets on the river. If you asked a non-poker player to describe the concept of “bluffing”, they’d probably envision the following scenario 

In the back room of a smoky casino, two players are involved in an intense poker hand. One of them pours sweat, deciding if he should risk everything he owns. After all, his opponent has to be bluffing……right? The table limit had originally been $1000; until the two remaining players began throwing car keys, jewellery, additional money, and house deeds into the middle. After what seems like an eternity, he finally breaks, throwing his hand into the muck with a look of disgust. Smirking, his opponent tables 7-high and rakes the biggest pot of his life.

In reality, big poker bluffs are few and far between. Most of the bluffs you make will be small bluffs – like the bluff on the flop in our example, or a re-raise bluff pre-flop. They will also be made quite frequently. It’s becoming very common for players to fire a continuation-bet on the flop regardless of whether they hit or miss. Big bluffs do have their place in poker, but usually they should be used sparingly, and only when you have a good read on the situation.

While this fictional scenario rarely happens anywhere outside the movies, it does illustrate an important point. Don’t play poker beyond your means. If you are not comfortable with the amount you have on the table, you need to find a smaller game. Being afraid to lose the money you have in front of you will cloud your mind, preventing you from making the best decision. You might avoid a very profitable bluffing situation just because you are scared to put all of your chips in the middle.