How to play the most important position at the table.

Position is one of the most important concepts in poker. If you're first to act it's prudent to only bet with a strong hand because there are a lot of players who are still to act and you can't be sure of their holdings.

Whereas, the button is the last position before the blinds. When it's your turn to act on the button a lot of information should already be available to you and you can act accordingly.

What is the Button?

The button or 'dealer button' is used to signify who is dealing the hand. In times past, everybody used to deal one hand each round to avoid any foul play. Now casinos have house dealers and of course there is no need for anyone to deal online, so the button is just an indicator of position.

How to Play the Button in Poker

As poker has evolved it's very common to see players raising when on the button very regularly. Especially if all players before the button have folded. This puts the raiser in a position of power as they only have to force folds from the small and big blind. These players already have money committed to the pot and have completely random hands.

It is important to adjust. If the players in the blinds are loose or known to be particularly aggressive it is advisable to raise less. If they're tight it means they can generally be exploited more. Tight players will often attempt to show some resistance after it is obvious they're being taken advantage of. This is usually quite superficial and although their preflop play might change it will take a very good player to adjust their ranges both on the flop and post-flop. If you find yourself in a situation where a player is showing serious resistance, it's prudent to fold your hand and give the raising a break for a few rounds. There is no point getting in variance filled situations when these players have already proven themselves to be fundamentally exploitable and you can make money without even showing down your hand.

Playing the button vs. a fish isn't quite as simple as playing vs. a tight player, but the rewards can be much greater. Fish, by their nature play a large number of hands and don't fold very often and your button raise is going to be no different. This does not mean you should be wary of raising, in fact you should raise more!

Having the button means that you are last to act on every street. You can see how the fish reacts to the flop, turn & river and play your hand accordingly. A lot of the time a continuation bet will take down the pot making raising the fish pre-flop a profitable play.

Professional players are so keen to play vs. fish that they will battle other players pre-flop to isolate the fish and get into a heads up pot with them.

A competent player willl quickly realise if they're being raised too regularly by the button. It is likely they combat these raises with 3-bets or re-raises and if you do not adjust the edge you once had could work against you.

Once a player begins 3-betting your button raises regularly, the simple play is to raise less and raise the button only for value. If you expect a 3-bet coming, make sure you go into the hand with a plan and a good hand to fight back with.

If you're confident in your post flop play you can also flat call, but this becomes quite complicated. The 3-bettor has momentum and be prepared to be facing a continuation bet at least 50% of the time.

The final option is to 4-bet. Note that once you have fired your 4-bet you are quite deeply involved in the hand. Before 4-betting preflop you should always know if you're prepared to get your money in with your holding and it's probably not worth getting yourself involved in this kind of ego war when there are so many other profitable ways to make money with far less risk.

We've created a profit heat map to show suitable hands to raise with from the button. This isn't gospel, and you'll have to tighten your range depending on your opponents: 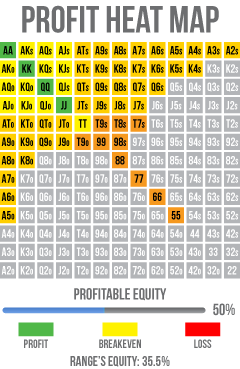 The lower stake games you play, the easier it will be to stick to the above rules. As you move up stakes, the important thing is that you adjust from these specific rules based on your opponents, their playing methods and specific situations. The button is the most interesting position in poker and the most played and played against.

If you master the button and strike fear into your opponents you're on your way to becoming a profitable poker player!
Follow
You need to be logged in to follow an article.

YES this is the best ever. i just checked and i make all my money on the button and have been playing it incorrectly. this is going to make me so much money.

profit profit profit. The amount of profit made from the button compared to all other positions is ridiculous. Who here opens the button more and plays it more profitably?