Getting Healthy and Winning Stacks!

I'm starting off a new thread to document my progress with Jaime Staples MyUltimateSweat challenge! For those unfamiliar with it - The basic premise is you can set whatever targets you wish over the next three months and document your progress. A winner will be chosen at the end of it all and they will be awarded a platinum pass which is buying to a $25k event along with $5k travel money, so the total package is worth $30k.

I've been on a bit of a health buzz the last few months already and this has given me the motivation to kick it up a gear. I've set out myself the following goals:

1) Lose 10kg. I'd lost around 5kg since May and I'm aiming to lose a further 10 on top of this to get my weight down to ~77kg. I will be aiming to go further that this long term, but this is within the three months.


Some background about me: I used to be outrageously fit. I am now a fat, unfit mess of a man. That is going to change over the coming months and it will all be documented here, complete with half naked photos and everything!

Progress so far has been solid. Weight wise hasn't been amazing, but I've built up a ton of strength compared to a month ago and my fitness levels are substantially better also. I'll be posting regularly as I hit various milestones and keeping people updated with humorous hands from teh pokerz.

Posted 2 years ago
Hope it goes well for you and cant wait to read your updates.
AshVIP

Posted 2 years ago
Go Ferg, look less like a potato and more like a french fry!
fawltyfelix

Posted 2 years ago
Love it!! I lost 20ish kilos not too long ago and it was awesome. I am routing for you and know you can do it!!
fergrberger

Posted 2 years ago
Will be going for my weekly benchmark run later this week. Stats from previous weeks so far: 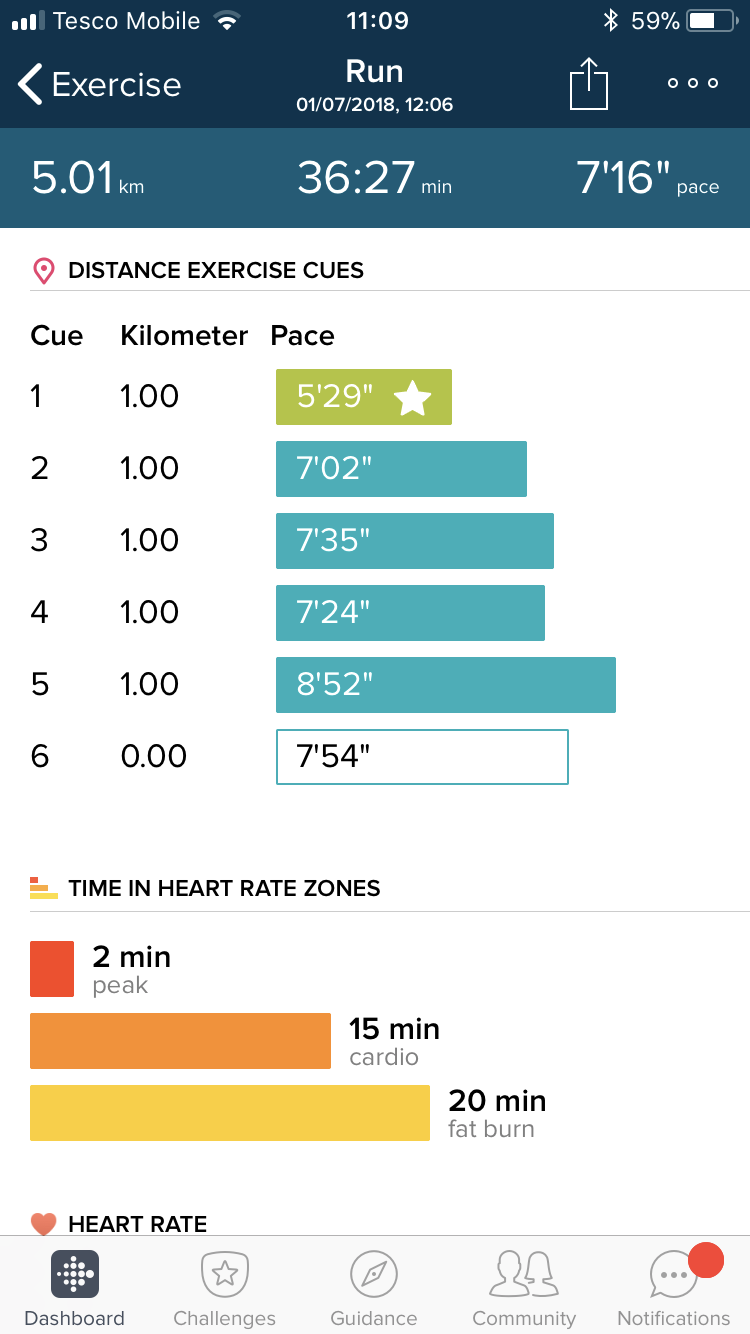 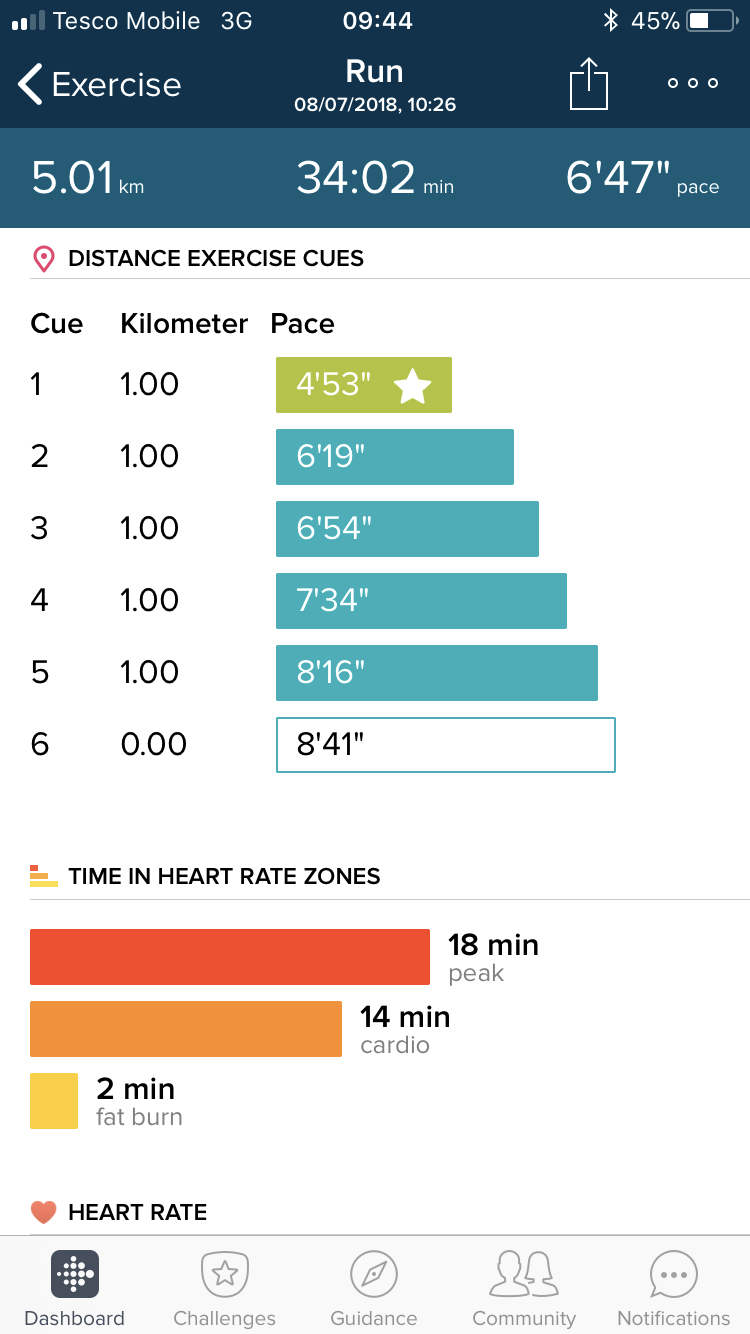 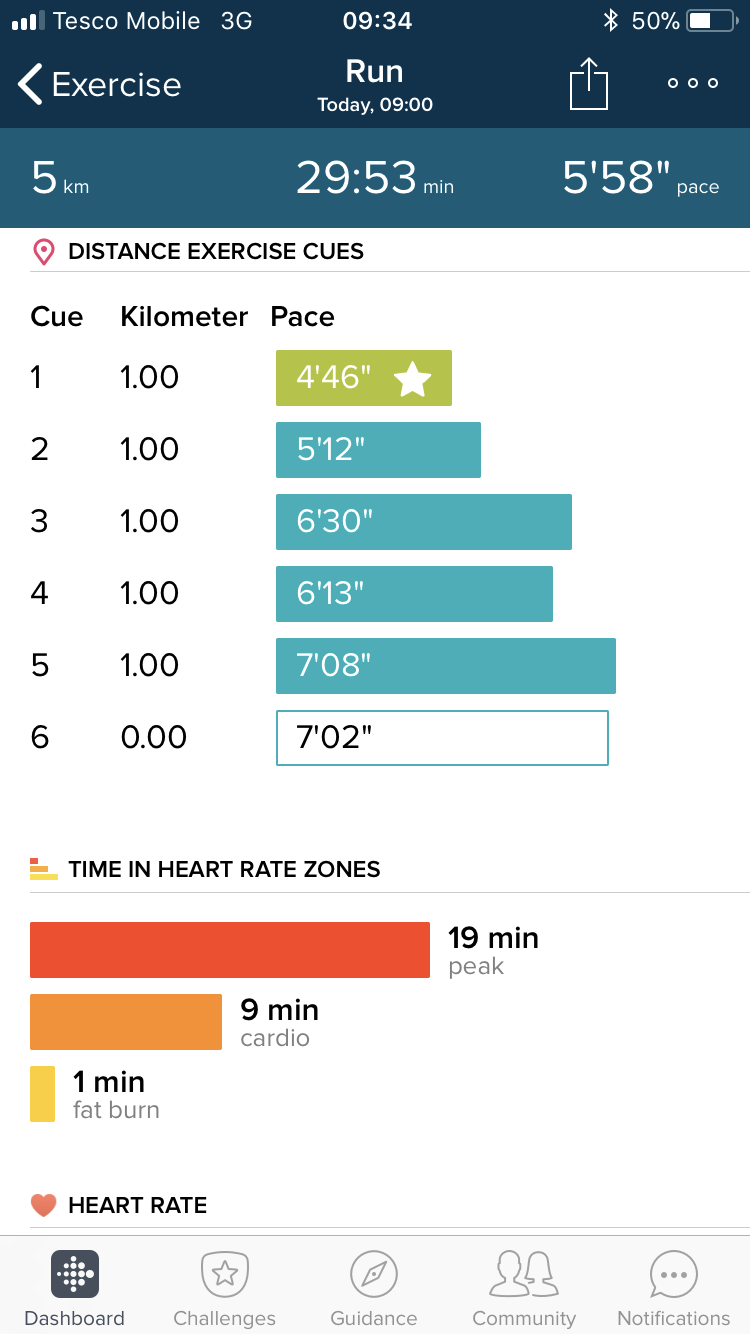 I’m hoping to get closer to 29m today, we shall see! As far as progress elsewhere goes, I’ve gotten to the point of being able to do 40 sit ups and 25 press-ups, the last week though I haven’t actually blasted out my max at any point. I’ve been in the gym focusing on different expertise’s to build up my overall strength, will be interesting to see if there’s any decent results from this!

Poker wise I’ve been ticking along, bankroll is up over €600 from starting the month at €500ish, volume has been poor though. Fun hand: 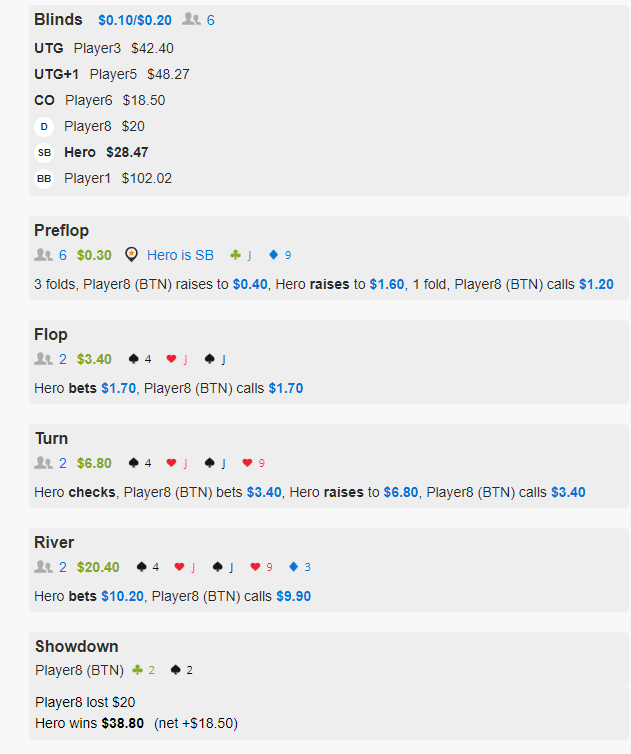 Posted 2 years ago
Just back in, not quite the improvements I’ve seen in previous weeks but still very solid. One thing I found with this run is that I was way more balanced throughout in that I had much more gas left in the tank for the last lap which was nice to see.

I’ve been poor enough this week foodwise as it was my birthday and I was out for a couple of meals and had a few pints etc. which I’ll need to cut out going forward if I want to make sigfnificsnt progress with the weight. Today I rocked in at 85.9kg, after starting the month at 87.3kg. 100% not the progress I would expect to be at at this point, but still plenty of time to turn it around. Will be playing some poker this evening so hopefully we can make some headway with the bankroll as well. 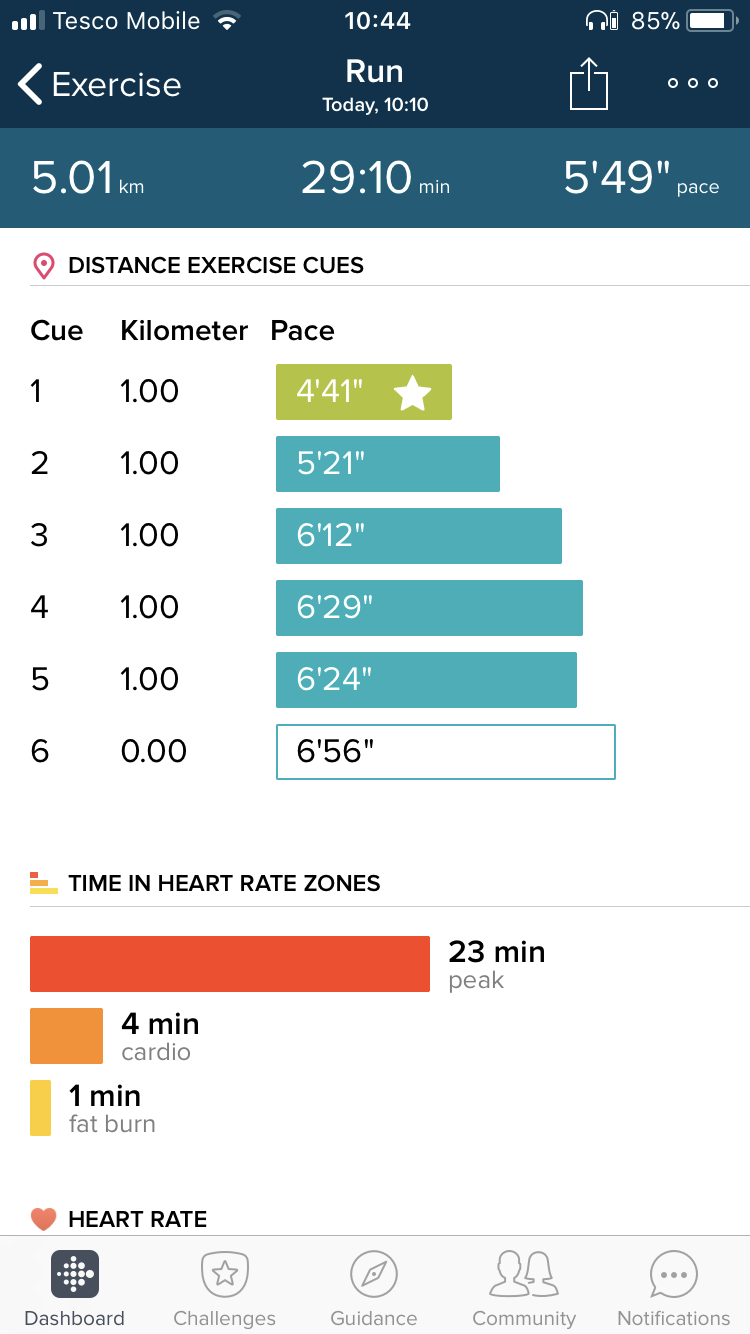 1) I am officially no longer classed as obese according to my FitBit, just very overweight! We're counting it as a win!!!

2) As a general rule I never run for public transport as I would always end up as a complete sweaty mess afterwards, even running for a short distance. Today I was in a big rush so had to catch my bus, so I ran ~100m. Barely broke a sweat! I was absolutely thrilled! Massive difference compared to a few months back. Posted 2 years ago
So last week or so has been pretty stellar all round!

In terms of weight, results are starting to come through a bit more after they'd slowed down a bit. Today I weighed in at 85.3kg, so still not incredible progress, but that has brought me to >7kg lost since I started taking this journey seriously at the start of May. Still a long way to go of course but the progress has been very steady which I'm thrilled with.

I took a step backwards in terms of running last week, I made the mistake of going out for a run during my lunch break one of the days I was working from home. I was planning on having lunch when I got home so I was going on an empty stomach and I ran out of gas HARD at 4km. I ended up having to pack in the run as I was feeling pretty awful all round so I won't be making that mistake again.

For my other strength goals, I have been focusing on a fairly solid weights program that a trainer at my gym put together for me and I have been seeing a marked increase in my overall strength. I haven't blitzed out my max for pressups/situps in a while as I'm sticking to his program pretty rigidly but I expect to see some serious improvements here when I go for my PB's again. I still haven't attempted any chinups as I'm still a long way off being able to do any yet, but overall feeling great and very confident!

Poker has been going fine. I was HEARTBREAKINGLY close to winning a platinum pass package outright with Fintan and Spraggys freeroll last Sunday. I was entered in as a wildcard entry, there was 73 runners in total and the winner got a $30k platinum pass package, 2nd place got 23 Sunday Million Tickets and 3rd-8th got 1/2 Sunday million tickets. I took an early chip lead in the tournament with a double in the first level and was top 5 for the entire thing up until the final table, I was outrageously confident. Alas, it wasn't to be. I ran KK into AK and AA for a threeway all in pre that cost me a large chunk of my chips and busted shortly after, I finished 6th which netted me a free milly ticket though so I guess I'll just have to go and win that. 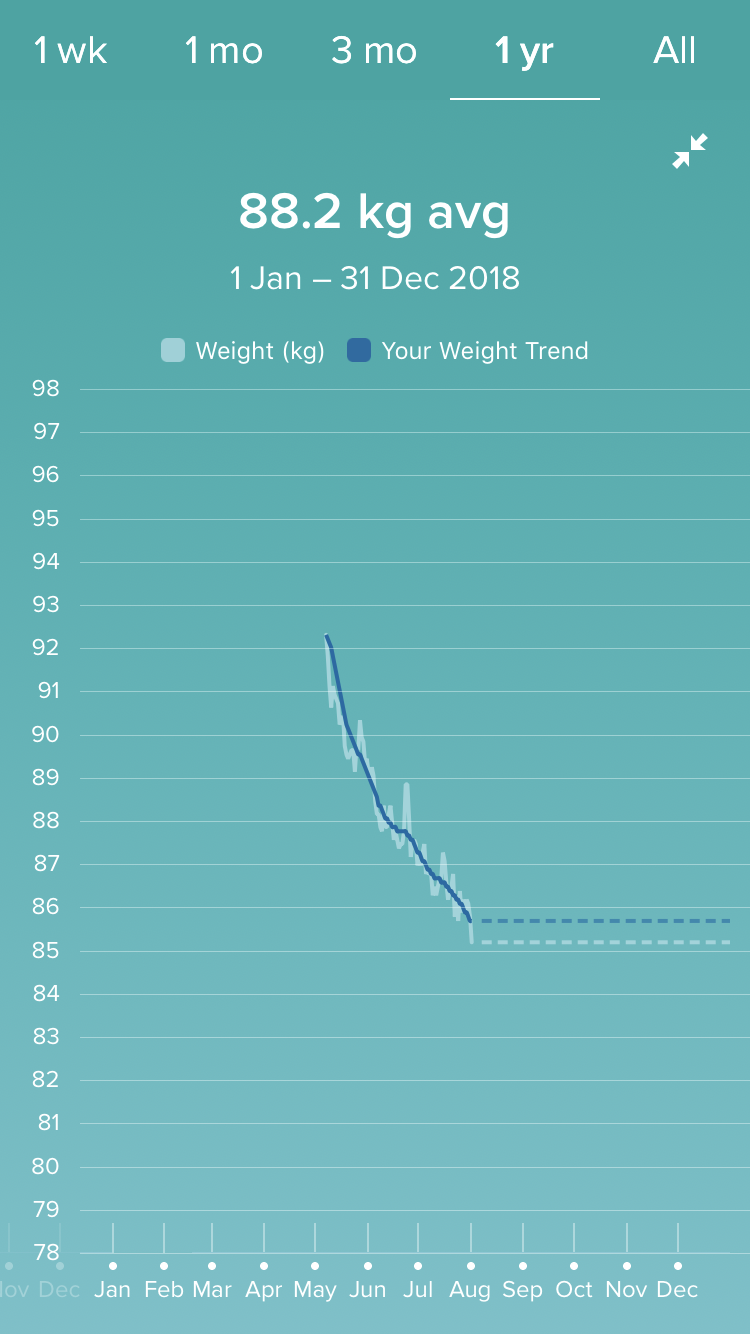 I’ll be postin a full update in the coming week when I get internet back at my desktop, posting from my phone isn’t ideal for a long update!

Posted 2 years ago
So, after a few weeks of radio silence here's an update of what's been going on! Some good news, some great news, and some bad news!

In terms of the Ultimatesweat challenge, I've elected to stop updated around this. I've found since I started doing it as part of a competition, rather than just for my own well being and general health that I've actually been less motivated. I will still be endeavoring to live as healthy as I can, I will be picking back up into running, and I will continue going to the gym regularly, but it will be for me as opposed to for a competition.

The primary reason I've been so inactive the past few weeks is that we've been moving house and have been without the internet for a good while so I haven;t been able to be at my desktop at all really. We've gotten most things unpacked in the new place though and are loving it here so far! I have a dedicated home office now which will be nice in terms of having a place to grind, it also means I will be able to start streaming again with some regularity. Before we had the desktop set up in the sitting room so if I wanted to stream I'd have to kick wifey out of the room which obviously wasn't great.

Some bad news - I've had to withdraw every cent I had online to go towards the new house so for the next while I won't be in a position to re-deposit which sucks. I've got a Sunday Million ticket still in my account so I'm planning on firing that next Sunday, I've sold a bit of action for it as well so I have a minuscule roll on Stars again, my plan is stream the lowest stakes while I'm grinding it back up from $60. I've been paying an absurdly low amount of poker for the last couple of months in general so probably not a bad idea moving down a bit while I get into the swing of things, obviously would have preferred not to have to start at 2NL again though

At the start of this month I met up with a bunch of the regular members from this forum which was awesome! A gang of us went over to Coventry to play in the Goliath, I steered clear of the tournaments but did pretty well at the cash tables. However, I did pretty poorly at the blackjack tables so that kinda balanced out...I had an amazing weekend though, it was great meeting up with the guys and gals, and I squeezed in an obscene amount of poker/alcohol into a fairly tight time window and had tons of fun doing it! I'll post here when I'm getting the stream back up and running, it will definitely be some time this week!

For anyone that isn't already, you can follow my Twitch channel here - www.twitch.tv/fergrberger.

Posted 2 years ago
Permission to post pics/videos from Goliath here?

Posted 2 years ago
Yeh of course, fire away!

Posted 2 years ago
A collection of my faves! Totally amazing weekend 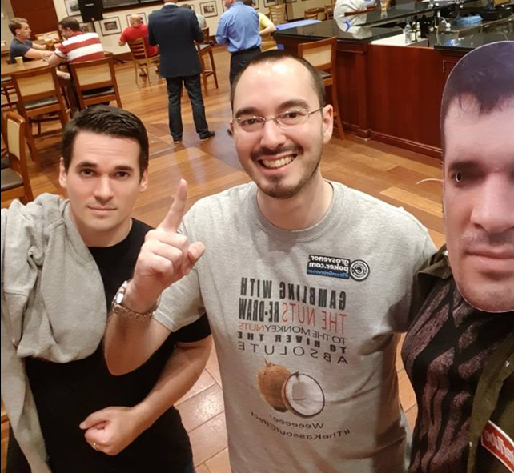 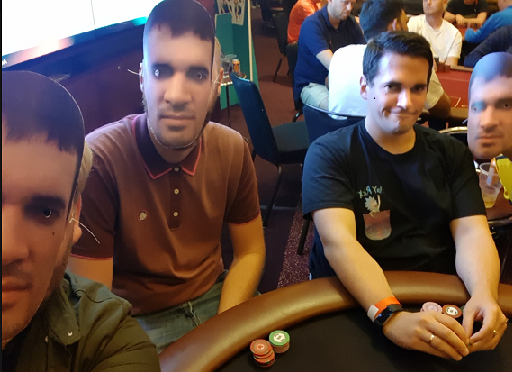 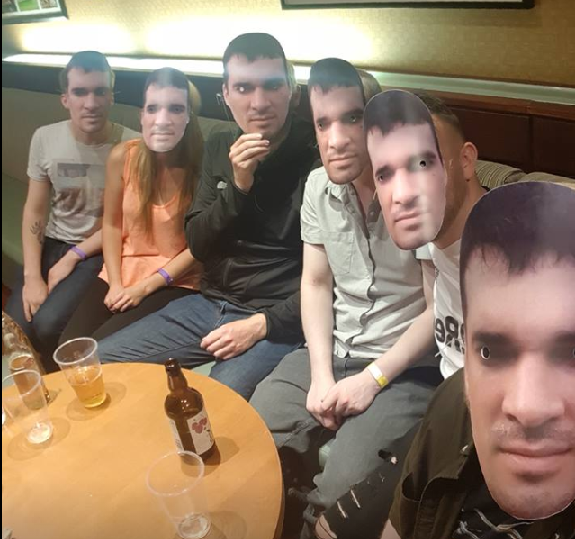 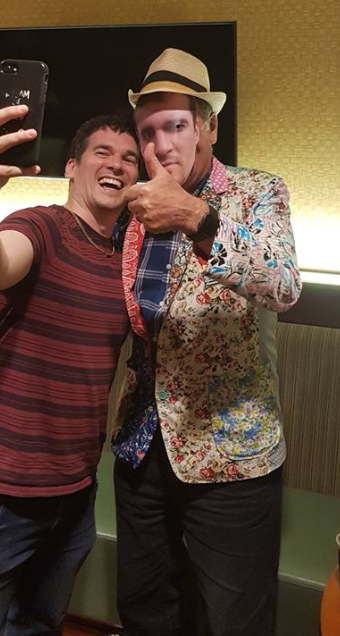 Posted 2 years ago
Video 1: I was quite drunk, don't really remember this but seems about right.

Video 2: This was at 6am, after I started airport drinking at 10am, and played poker from 1pm until 5.30am, drunking heavily the whole time. It is possibly the drunkest I've been in the last many years.

Ferg Masks: Because I was arriving on the Friday and all the other arrived Thursday Ash took it upon himself to get the masks done, so that I'd be there in spirit at least. Also, John Hesp wore one which was excellent.

1
Posted 2 years ago
Had a bit of a read up. Looks like you've had a fun Bank Holiday! Look forward to getting involved in some streams when you're doing them again.
Where are you playing these days?
fergrberger

Posted 2 years ago
I've been playing all over recently for the low volume that I have been playing, for this though I'm going to go back to Stars. The stream numbers are always higher on the software people are most familiar with, and I can do zero delay streams in the large zoom pools