The origins of stud poker

Similar to all other poker variants the objective of the game is to win your opponents chips. These are small circular plastic discs which can be exchanged for their monetary equivalent after the game is over. Stud can also be played as a tournament, where the objective is to be the last player left standing with all of the chips.

Playing a hand of 7-card Stud

Before any cards are dealt, all players must pay an ante, placing it into the “pot” in the centre of the table. At this stage each player will be dealt three cards, 2 face-down and 1 face-up so that everyone can see. The two down-cards may be looked at but should be kept secret from the rest of the table. The first round of betting, “third street”, may now take place.
Stud is considered a non-positional game in that there is no dealer button to indicate who will act first. This depends on the strength of the up-cards and can change from street to street.
Third-Street – The player with the lowest up-card acts first, with the action then proceeding in a clockwise direction around the table until both the following are true -
The player with the lowest up-card is referred to as the “bring-in” and is required to make a starting bet. There are 2 options – a smaller bet or a larger bet. The size of the smaller bet here will depend on the game. The larger bet will be equivalent to the “small-bet” as specified in the game stakes. So in a $1/$2(ante $0.15) game, this will be $1. The smaller “bring-in” amount will usually be around $0.40. 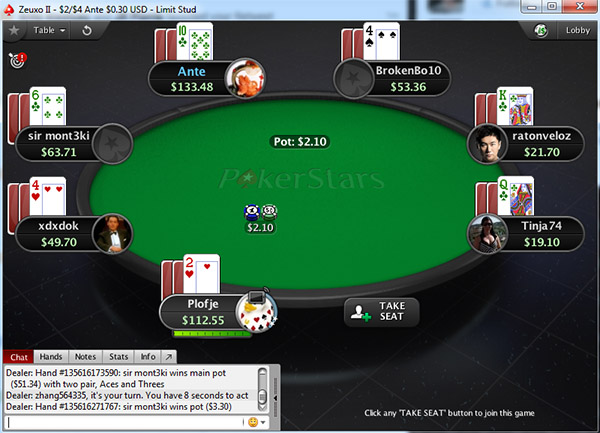 The action proceeds in a clockwise direction around the table where players have the option to either call (match the current bet), raise (increase the current bet), or fold (give up on the hand).
Fourth Street – Each player is dealt another card face-up, referred to as “fourth-street”.  The player now first to act is the player whose up-cards are the highest. Highest card wins, although any pair will beat a high card. So holding 77 as up-cards is stronger than holding AQ as up-cards.
The player to act may now check, or bet. Assuming he chooses to bet he must select the small-bet sizing ($1 in the $1/$2 game). Action proceeds in a clockwise direction and players may choose to call, raise, or fold.
Fifth Street – A third card is dealt face-up, referred to as “fifth street”. Once again action starts with the player whose up-cards have the highest value. The main difference with fifth street is that betting will now occur in increments of the big-bet. The initial player to act has the option to check or bet the big-bet amount ($2 in the $1/$2 game). 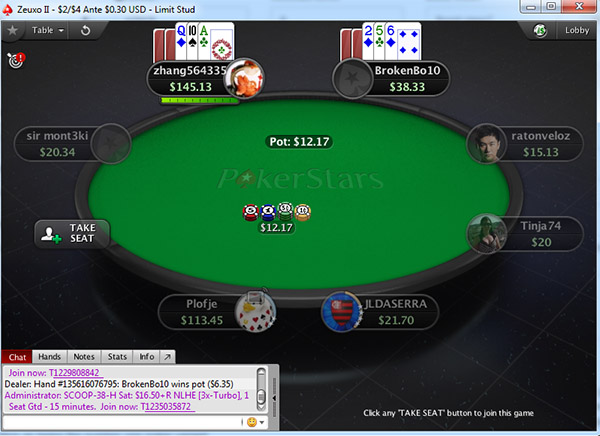 Sixth Street – A fourth card is dealt face-up. Similar to previous streets the player with the highest value up-cards starts the betting. Betting will continue to occur in increments of the big-bet. 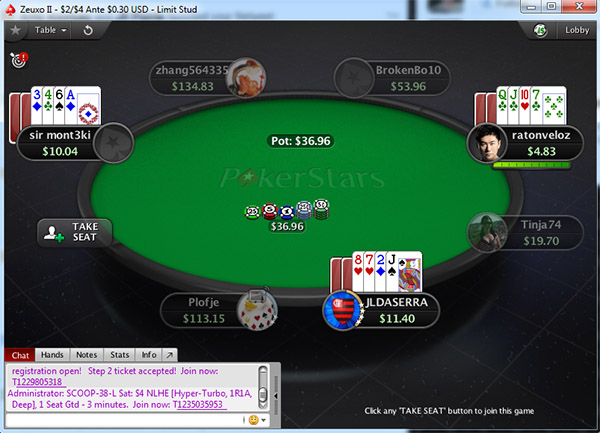 Seventh Street – A final card (7 in total) is dealt face-down. This card may be looked at but should be kept secret from the other players along with the initial 2 down-cards. The player with the highest value up-cards takes the betting lead. This will be the same player who started the action on sixth street, since the 7th card dealt is unknown to other players. Betting occurs in increments of the big-bet. Assuming there are still players left in the pot after the betting is complete then we reach “showdown”. Players must turn over their cards to see who wins the pot. The player who takes the last aggressive action should turn over his hand first.

The community card – As mentioned earlier it is possible to run out of cards in an 8 handed stud game. This will happen somewhat rarely, but if all 8 players would take 7 cards then 56 cards would be needed and there are 52 cards in a standard check. In such an eventuality the 7th card will be dealt face up on the table and used as a community card. All players may make use of this 7th card to construct a 5-card hand.
Bring-in tie – Assuming there are two players holding up-cards of the same rank, certain suits may be counted as stronger than others for the purposes of a tie-breaker. These are ranked in alphabetical order with clubs being the weakest and spades being the strongest. So if one player holds the 2h and another the 2s, then the 2h has to bring-in and start the action. The ranking of suits is also used to determine who will act first on the following rounds. However it does not affect made hands at showdown – so if we have the same nut-low as someone else, we will chop the pot.
Fourth street pair – While typically betting takes place in increments of the small-bet, players have the option of using the big-bet sizing on fourth street when their up-cards show a pair. This is optional, although once the big-bet sizing is selected then other players must raise in increments of the big-bet.
If a player is all in and can't pay the bring-in, the bring-in moves clockwise to the next player, regardless of his up-card
Can't pay the bring-in – If a player is all-in after paying the ante and are subsequently dealt the lowest value up-card, it is obviously not possible for them to bring-in and start the betting. The bring-in moves clockwise to the next player on the table, regardless of the value of his up-card.

If you found this article helpful you should follow us for more amazing articles about 7-card Stud strategy articles!

You can also check our huge library of poker strategy article but before that find out which poker variant you like more by reading it's rules at our Poker Rules page.

I want to learn everything about 7-card Stud! 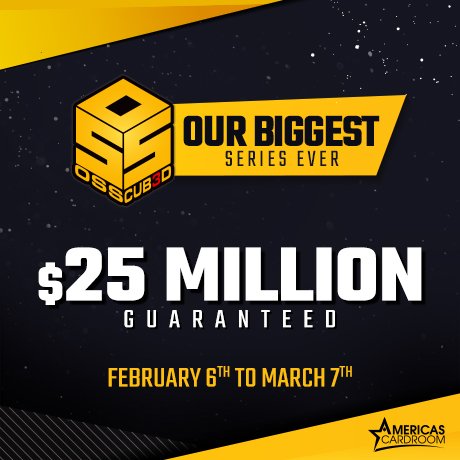