Everyone Loves a Bargain - Using ICM to Crush Monkeys Part 1

Playing with ICM in mind doesn't just triple the size of your 'Fold' button. Honestly!

I know that in the last series I wrote, I Crush Monkeys, it felt as if we looked at ICM in a relatively nitty sense. We open folded AQ from the button, raise-folded AK 3 handed, and it seems that every time we studied something from an ICM perspective, we ended up folding. I promise ICM is not always about folding, in fact one of the most practical uses of ICM centres around situations where you are working out the profitability of moving all in.  But just as you should learn to walk before you try to run, I think it was important to get the foundations right. However, with that done, I think it’s time to learn how to Crush some Monkeys.

Most people hate to waste money. Want proof? Spend an hour watching people in supermarkets as they compare tiny differences in shampoo or watermelon prices, or as they swamp the reduced section to save as much cash as possible. I once saw an old woman deliberately park her mobility scooter in a way that blocked off the entire isle to give her first rummage in the discount freezer! Poker players are no different; I’ve happily paid $500 to play a poker tournament only to gasp at the prospect of paying £5.50 for a pint at the bar at the end of the day. Personally, I think this is down to the literality of exchanging money when you’re buying something being far less obvious when you’re in a tournament, where you’re usually thinking more in terms of chips than of how much money a particular decision is costing you. Naturally, there's a point in the tournament when this changes (usually around the bubble) and most people begin considering the financial implications of their decisions. This monetary attachment can influence people's strategies immensely, and just like the crazy scooter lady, people will often act uncharacteristically.

Even if only at a basic level, most people are instinctively aware of some of the principles of ICM (even without knowing it). They understand that decisions on the bubble can cost them money, and as a default, lots of players tighten up. Accordingly, better players understand that if you have a stack big enough, you can (and should) pile pressure on players who are overly tight on the bubble, this is basic exploitation.

However, if we know a player understands ICM specifically, we can look for more sophisticated ways to exploit them; after all, they’d probably do the same to us. Spots where we can do this are most prevalent when we are one of the chip leaders and cover the targeted player. We'll also have more success when there is a particularly short short-stack and other players are in no immediate danger, as we basically want to manipulate their fear of losing money by busting prematurely. Now, this doesn't necessary mean that we have to go putting everyone all in with 94o, but we should look for good spots to add additional pressure by finding ways of making plays that imply you are unlikely to fold, and therefore removing your opponents' illusions of fold equity.

Importantly, be sure you pick your spots carefully because getting it wrong can be catastrophic - just ask Joseph Cheong! Cheong made a huge pressure play 3 handed in the 2010 WSOP Main Event when, attempting to use the much shorter stack of John Racener as leverage, he famously 6bet shoved A7o. I'm not going to go as far as to say this is a mistake, after all, Cheong is a much better player than I am, but I do feel that it was an unnecessary play as he'd been running over the table in other spots. Cheong eventually lost the hand to Duhamel’s Pocket Queens and he bust shortly after. Whether you think Cheong's play was a mistake or not is a discussion for another day, but the hand most likely cost Cheong millions of dollars, which unquestionably puts the importance of picking your sports carefully into perspective.

It's also worth remembering that unless they're particularly tight, it's not a good idea to try to overly pressurise the shortest stack as they will often be looking for any half decent excuse to get it in. Instead, target the medium stacks as they will be likely to ladder more easily and therefore have more to lose by going broke. I'll go into some more examples in depth in another article, but I just want to remind you to think ahead when making these plays. Oh yeah, one more thing, pick your spots carefully and make sure you don't open the door to being exploited yourself with your bet sizing. This might even sometimes mean passing on a +EV spot against a sicko if they have you covered, but we’ll look at what to look out for in the next article. 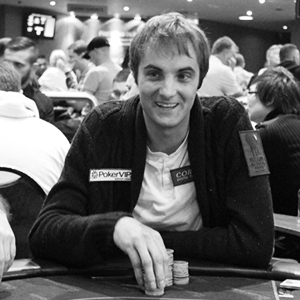 Primarily an MTT grinder, Dan began playing poker over curry and Kopperberg whilst at university about 4 years ago.   He exists as several aliases but is best know as 'danshreddies'. His biggest score came earlier in the year when he finished 2nd at PKR Live fo ... Read More

Hey bud could you maybe do a. New video on 9man turbo and180 man turbo or bigger field of u like

Primarily an MTT grinder, Dan began playing poker over curry and Kopperberg whilst at university about 4 years ago.   He exists as several aliases but is best know as 'danshreddies'. His biggest score came earlier in the year when he finished 2nd at PKR Live for around $16k. Playing the bulk of his online poker on smaller sites, he has had success online with over $300,000 in earnings, the most notable being a 3rd place in the Big55 for just under $10k.   He prides himself on being a huge optimist and is delighted to have been offered an opportunity to coach with Pokertube and PokerVIP. You can expect to see some unorthodox articles and videos over the next few months.