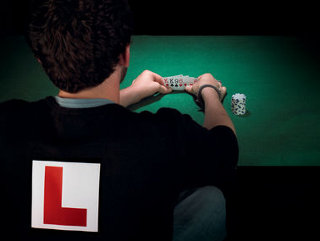 Vodkahaze (Matt Ranger) is a small stakes NLH and PLO player from Montreal, Canada. He is also in all likelihood the only person known of that eats straight salami as a snack.

So you want to learn Pot Limit Omaha?

Whether you come from No Limit Hold’em or even Six Plus Hold'em, some other game, or have never played poker before, I’m sure you’ll come to enjoy this game very much. With a bit of luck, you might even make some money. If there is one place to start learning this game in my mind, it would be at the first decision you make each hand; before the flop. In this article, we will discuss hands preflop, their value, and common mistakes players make before the flop.

To play a hand or not is one of the most important decisions you can make in PLO. Many players think that since a great majority of 4 card hands you’re dealt would be somewhere around a coin flip against each other if all in preflop, they can play almost every hand. You can go ahead and try that if you want. Personally, I have better ways of burning my money.

So what are we looking for in a hand when we decide to play it or not? The first thing you should think of is position. Being last to act is an overwhelming advantage in PLO (much bigger than in NLH), especially at the flop and beyond. This is not to say that you should play every single hand when you have the button, but having position can make up for a lot of problems in the structure of your preflop hand.

If you are going to play a hand out of position, make sure it is one that will play simply on the flop and beyond. You should avoid low card hands, even good looking ones, as you will often be stuck with 2nd best draws and wondering if you’re even playing for the best hand. Also avoid hands that have gaps in them. Hands that are well connected hit the flop hard when they hit, as they will mostly hit a hand and a draw at the same time (for example, JT98 on a 982 flop).

The next thing you will want to look at is the structure of your hand. In PLO, much of the play after the flop is based around the nuts, so you want some nut-making potential in the hands you play. This is why hands like K962 are pretty much unplayable. Not only do you rarely hit the flop, if you do hit, a bunch of turn cards will usually make your hand look pretty bad.

Having danglers (random cards disconnected of your hand) destroy the value of your hand pretty fast. Think of it this way: If you have QJT9, you would have QJ, QT, Q9, JT, J9 and T9 if you were playing NLH. All 6 of those hands are playable. If you have QJT3, you have QJ, QT, JT and then some Qx, Jx and Tx trash. Now you have 3 playable hands and 3 that are trash. This is why you should reserve yourself to playing most hands with dangling cards in position.

Here's a link to the next related article on pairs & rundowns in Pot Limit Omaha and you should also make sure that you fully understand all the Rules of Omaha before reading more intermediate strategy articles about Omaha.