In this article, we go over some live hand examples. 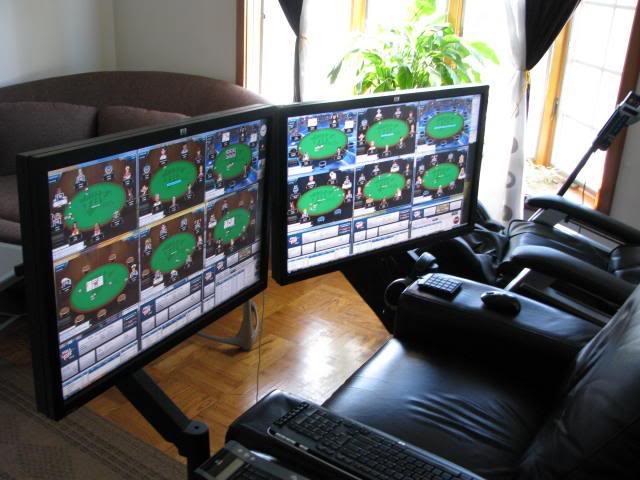 are a few examples to go over the concepts covered in some of the various PLO artcles.

Try to answer the question for yourself before reading the answer.

Everyone involved has 100bb effective stacks, with a mix of passive and aggressive players. What's your play?

You should tend to fold this hand, you’re almost guaranteed not to have position later in the hand, this rundown almost never flops a nutty wrap, and the flush draw is only there to make your hand look better than it really is. A hand like 6633 double-suited would be the same here.

Like that scummy friend you have with the “great business idea” that “just can’t fail, man” who only needs a bit of your money to start up, you’re only going to get yourself into trouble by being liberal here.

Make a nice, fat 3bet and call if you get 4bet. This hand is very good with position, but you don’t necessarily want to invite more players in, as you will half-hit the flop pretty often. You want to thin the field then hope to flop something or try to take the pot down with a Cbet. A hand that would have similar playability in this situation would be 2345ds (only if you are comfortable enough to play the rock bottom rundowns when you have position).

In a 1$/2$ game, a loose and overaggressive fish opens in MP for 7$ and a reasonable, somewhat tight, player calls on the BTN.Everyone involved is 200bb deep or more.

The small blind folds to you on the big blind with a876. What now?

Most people get excited at the sight of a 3 card rundown with a suited Ace, but this is just a call. Remember that the fish is probably worse postflop than you are, and will probably never fold to a 3bet (which will invite the BTN along for the ride). So 3betting here only multiplies the variance and reduces your skill edge over the fish (by making the pot bigger and the number of bets you can put in after the flop smaller).

I’m not saying that 3betting here is –EV, but it isn’t nearly as profitable as calling.

You’re probably laughing at how easy of a 3bet this is, but for most players it’s actually a simple call. Your hand rarely flops anything and is pretty hard to play OoP against someone who is competent. Think of this: what is the first hand someone puts you on when you make a big reraise preflop?

That’s right, you having Aces will always be in the back of his mind, and since you’re not flopping anything very often and he has position on you, he’s going to have a fun time torturing you once the flop comes.

To profitably 3bet trashy Aces like this, you need to be 3betting very wide from this position, so much so that he will think you’re full of shit most of the time (people who can do this well are rare, by the way). Only then will having the preflop nuts mixed into the really wide reraising range is good, but until you’re playing this way, you should refrain from 3betting these kind of hands.

Try to 3bet hands that play simple postflop when you’re guaranteed to be OoP. Hands like JJ88ss, A765ds or T986ss play much better here than bad AAxx hands.

If you found this questions hard to answer then you should check our, always up to date, article about Omaha Poker Rules and Strategy Tips .

Make sure to become a member for more articles about Omaha and all the variations of Poker!

I am ready to become Omaha Master!

4 Betting in Heads Up Poker

It’s going to be all go on ACR over the next few days with a $1 million GTD ev...