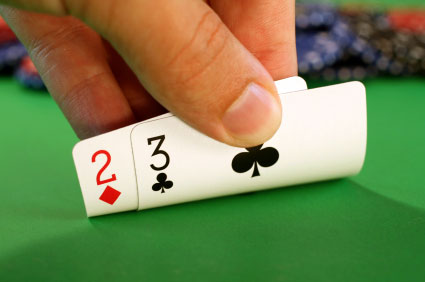 What are “dominated hands”?

Wow, crazy huh? 78o is in much better shape than AQo. We'd choose 78o all day if we knew our opponent held AK. It's dominated situations that result in having the worst equity and we really want to avoid them somehow.

Obviously we can never know for certain if we are dominated. We could certainly just stop playing hands like AQ, but that would be foolish. Hands like AQ are a decent source of profit, despite sometimes being dominated.

The key is to avoid situations where we are often dominated.

Imagine a tight player opens UTG. We are on the BU and look down at kq . In order to understand why some hands are dominated more often that others, let's put our opponent on a range. Mainly pairs + broadways, but also one or two suited-connectors.

This is a 12.7% range. KQ actually has just 42.3% equity against this range. Given that we will have position post-flop we could easily decide this is an acceptable call. Let's think about it from a dominated-hands point of view though.

Again we need to avoid situations where we are often dominated. Usually it won't matter so much if on occasions we draw to a king-high flush and our opponent has the Ace-high draw. Of course, it still sucks, but we didn't necessarily do anything wrong. So long as our opponent can have more dominated draws in his range than draws that dominate us, we can probably chalk it up to variance or a cooler.

On the other hand, if we are routinely drawing to 6 high flushes on paired boards, we are asking for trouble. We need to keep in mind our reverse-implied odds. If we have a weak draw on a dangerous board, our reverse-implied odds will often completely outweigh any implied-odds we have. It starts to become increasingly likely that when we hit, we will either get no action or we will lose a large pot to a hand that dominates us.

Some drawing situations to avoid -

This is not to say we should never call with these hands. We should think about our opponent's range and decide whether we think better draws are a large or small part of it. Having draws to the nuts is always far more valuable that holding dominated draws. We want to be the ones dominating our opponents, not the other way around.