Hand reading is another essential skill and is especially useful in playing against other good poker players. The key is to think in terms of ranges rather than exact hands. 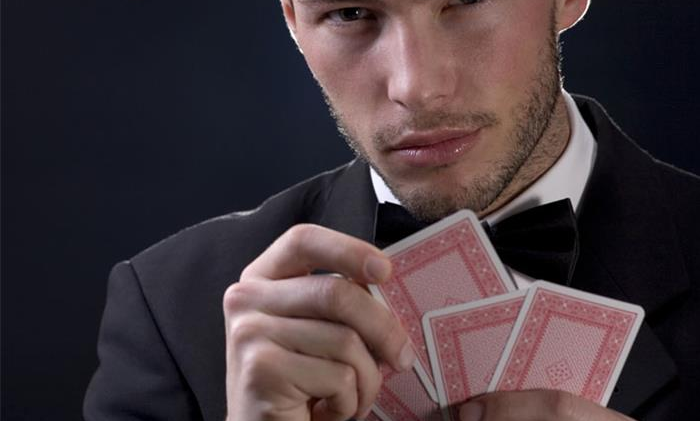 We’ve all seen it in the movies. Mike from Rounders, reading the judge’s game blind; putting the entire table on specific hands after having seen zero action. Or how about Brett and his mentor from “Deal”, starting into people’s souls from across the room, putting players on exactly AK/AQ.

These examples serve to solidify the common misconception that “hand-reading” is a mystical process; a process tantamount to mind-reading. In reality it is a process of logical deduction; one that also incorporates elements of psychology.

A key step in becoming a proficient hand-reader occurs when we begin to think in hand-ranges rather than specific hands. How many times have you seen fish make an inconceivable call-down only to type “I put you on AK” in chat. If these players had been making a range-based analysis of our hand, rather than what effectively constituted a wild-guess, such mishaps would occur less frequently.

Initially we know our opponent’s range consists of any of the possible 1326 starting combinations. As the hand progresses and further information comes to light, we can begin to narrow that range. Hopefully by the river we will often be able to narrow our opponent’s holdings to a few different combinations of hands.

Let’s pretend villain is a tight player and opens UTG on a 6-max table. It’s safe to say we can discount a hand like q6 from his range. In fact, we can discount the majority of the 1326 starting hands. Perhaps if this player was very loose we wouldn’t be able to narrow his range so significantly; hence hand-reading also involves psychology/reads. Two different players might make the same play, but we discount a different collection of hands from their respective ranges.

Let’s suppose our tight UTG open decides to cbet a dry flop of k82. It then becomes a case of asking the most relevant questions to identify how we go about narrowing villains range further. One relevant question might be – What is villains Flop-Cbet%? Players that Cbet a large amount may possibly be Cbetting a K-high dry board with their entire range. If this is the case, perhaps we can’t narrow villain’s range much further in this instance. We’d be able to narrow his range more significantly if such a villain were to check. It could be he does this with showdown value he doesn’t want to cbet, perhaps a hand like TT-QQ, and is intending to check-call.

Ask yourself key questions about your opponents play style.

Conversely if villain was the type who didn’t cbet often, we’d have to assume he had a hand that hits the board when he cbets. We can discount random whiffs like QJss or 55. Supposing villain checks instead, we can then go on to discount hands like KQ/AK, AA, 88/22, from his range because he’d nearly always be cbetting them.

Another question we might ask ourselves: Does villain like to slowplay big hands on the flop? (i.e check/call or check/raise) If this were to be the case we might be able to deduce that villains flop cbetting range is not as strong, since he will be checking some strong value hands. We also learn that we can’t discount strong value-hands from villains range just because he checked.

The process continues on the turn/river. Which hands does my opponent like to double-barrel? Some players might tighten up significantly on the turn, while others will barrel with a wide variety of bluffs/semi-bluffs.

Always think in terms of a range, not a specific hand.

If you think back to the example of the fish with AK, his problem is that he is trying to put you on a specific hand, and not taking a range-based approach. In fact, this type of player becomes progressively more confused as the hand develops. You, on the other hand, having developed strong hand-reading skills, will have the clearest picture of villains range by the river. You will come to realise that the river is where your biggest edge lies if you are competent.

The fish has also failed to adapt his perception of your hand/range as new information comes to light. Just because you have discounted a certain hand from villain’s range on an earlier street, it doesn’t mean that hand can never be in his range (it just appears less frequently). Perhaps villain is thinking on a level and taken a deceptive line. Don’t make the mistake of refusing to re-evaluate, like the fish who puts you on AK and then shuts out all further information.

One night in Newcastle about 5 years ago, I was a fresh faced spring chicken. Lad made a fold that looked crazy for 1/3rd of pot on river with top two pair. Called opponents hand perfectly. That man was Jon Lundy.

Very simple love it! Nothing better than naming a players hand. Any cool stories about this anyone?