When we talk about improving our red line, we mean improving our non showdown winnings. It's something many experienced players struggle with. We're here to help you improve your red line effectively.

- What is the Red-Line in poker?

-Should I have a positive Red-Line?

- Why are high Red-Lines popular?

- Which factors influence the Red-Line

What is the Red-Line? 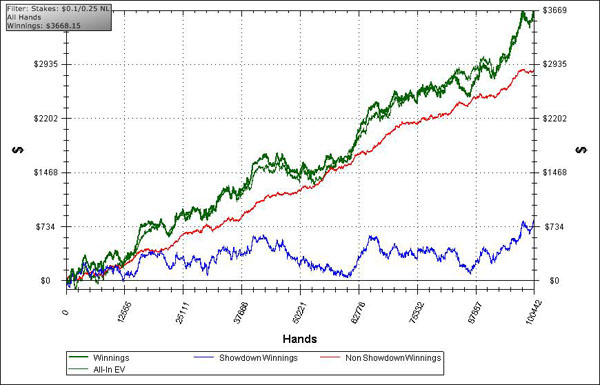 Is the Red-Line Important?

The answer is, it can be, but not always. Our primary concern should be having a green line that is positive. It is not necessarily a big deal that our red line is negative so long as we are having a decent winrate overall. In other words, there is no inherent benefit to having a positive red-line.

For example, calling stations will typically have a positive red line. Their red line will not decrease because they rarely fold. However since they go to showdown so wide in most cases their blue line will be so bad that their overall winnings are negative.

The red-line is only important if it is good for the correct reasons. It's not difficult to arbitrarily increase red-line by just never folding postflop, but this clearly would be a poor strategy. The majority of players with break-even or positive red-lines are actually losing players. It can be necessary for them to adjust their style to one with a falling red-line and only then begin to increase their red-line, but this time in the correct way.

Should I have a Positive Red-Line?

It is recommended for newer players at the lower limits to focus particular attention on their blue-line and let their red-line fall. A rough guide is that so long as the red-line is losing at less than about 10bb/100 hands for 6max players playing 100bb effective stacks there is unlikely to be a problem. For such a red-line, the corresponding blue-line should be around 14bb/100 or higher which will result in a positive winrate.

There are two reasons for this. Firstly it's simply an easier way to play the game when first starting out. We can focus on making hands and extracting value and then focus on the bluffing aspects of the game at a later point when we have become proficient atvalue-betting. The second reason is that in certain lower limit games we may find ourselves playing against opponents who don't fold much, making it especially complex to play a positive red-line strategy.

Does this mean a positive red-line strategy at the micro-limits is impossible? Not at all – the displayed graph is played at micro-stakes and correct strategies have been used to boost red-line earnings.

The higher up in limits we play the more likely we should be to have a break-even or positive red-line. Certain types of strategy are also associated with positive red-line. For example it is very common for players following a short-stack strategy to have rising red-lines and falling blue-lines.

Why is a positive Red-Line so popular?

So if it's not necessary for players at the lower limits to have a positive red-line, why do many low-limit players attach so much importance to it? There are two possible reasons for this.

1. It's common for high stakes regulars to have a positive/break-even red line, so players at the lower-limits want to imitate this

2. Ego. It's simply considered cool to have a positive red-line even if the reasons are not based on an accurate understanding of the game.

There are three main generalisations we can make regarding someone with a low red line. We will consider how to improve our red-line in part 2 of this series.

1. Folding the best hand too frequently. A quick example might be opening preflop quite wide and then folding 85% of the time to 3bets.

2. Not getting opponent to fold the best hand frequently enough. This doesn't necessarily have to be huge 3barrel bluffs (but does include these). For example a river spot where we have T-high, and let our opponent showdown his J-high and rake a small pot. It's so easy to take it from him here (even if he is a calling station) – the small pots can really add up.

3. Not value betting thinly enough. This may seem counter-intuitive at first since isn't the blue-line mainly associated with value-betting? Imagine a river spot where we hold a thin value-hand in position. Assuming we check back the results of the hand will always affect the blue-line, never the red line. Assuming we bet however, the results may affect the blue line (assuming we get called), but some percentage of the time our opponent is surely folding, resulting in an increase to our red-line. Players with a tendency to strongly over-value made hands often end up with a break-even or positive red line.

In part 2 we will discuss common spots to increase red-line in the correct way.