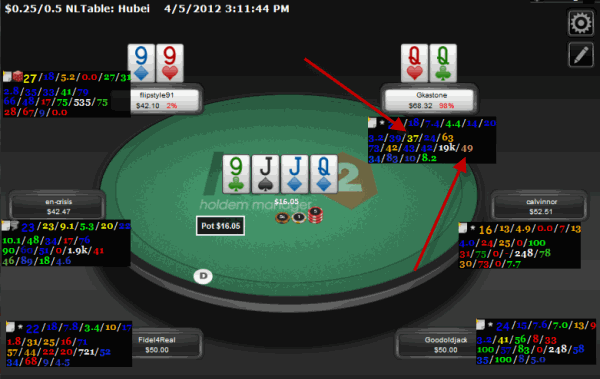 Stat tells us how often a player will re raise pre flop after the pot has already been raised and 3 bet in front of him. This is typically a very strong move but one top regs utilise as a semi bluff due to there being no room for a 5bet bluff from any opponent. Therefore this is a stat that we can use to see how likely it is someone can pull off a very confident semi bluff and therefore the likelihood of that player being an aggressive, thinking player. Most players will have a C4B of 2-4 due to the rarity of picking up a premium hand after a pot has been 3bet.

To play a TAG style we should aim for the upper end of most regs C4B so around 4-5 although it is more of a player and situation dependant stat.

This stat tells us how often a player will lead on the Flop, Turn or River without the initiative ie. did not make the last aggressive play on the previous street or pre flop. This is a move that many players associate with poorer players who make a bet based on their hand strength rather than when they have the lead. It is however a move that many regs do not utilise despite it being a bet which is very hard to defend against. A player with a high DB may indeed be a fishy player but some regs will have a very high DB stat due to the difficulty other players have facing it. There is no stat to aim for to play a TAG style but we should have the DB in our arsenal.

This stat tells us how frequently a player will make a very small sized bet to try and take the pot down cheaply. It is often made by the player OOP when the hand reaches the turn or the river without the pre flop aggressor making an attempt to win the pot. It is used by regs to try and take the pot away when they have no equity in the pot but also by fish to see a cheap showdown. A player with a high frequency of PB’s may be trying to steal pots away whenever they are shown weakness and we can therefore make an aggressive move with the knowledge they have no Show Down Equity and thus will fold a high frequency of the time. There is again no stat to aim for to be a TAG player but we should be using a PB when we are against a player who plays very straightforward and has shown no strength in the pot.

This stat tells us how often a player will win a hand when they see a flop. We should also look at a player’s VPIP stat as the tighter a player is the better hands they take post flop meaning the higher their W$WSF should be. We should also look at a player’s WSD stat as when combined we can begin to tell how passive/aggressive a player is post flop. If they have a high W$WSF and low WSD it suggests they are very aggressive, getting lots of folds on the Flop and Turn but will show up with weak hands at showdown when called down. A player with a high WSD but low W$WSF is likely playing way too tight/passive as they fold all but their best hand before showdown.

stat tells us how much money a player is winning in comparison to how much money they are putting in by calling another player’s bet on the river. Eg. If a player has a RCEF of 2 they will win $2 for every $1 they put in. Over a large sample we can see very clearly how efficient our river calls are. We can use this stat to see how light a player is calling down and go for bigger and thinner value bets against players who have low RCEF. A player who has a very high RCEF is likely calling down with too tight of a range and can be easily bluffed on the river.

This stat is the same as WSD except it disregards smaller pots. This is useful as it allows us to see how well players make correct calls and folds in bigger pots. As the highest variance is in the biggest pots in the short term we can significantly reduce our swings by making correct bluffs, calls and folds against different players. We can also go for bigger value bets against players with a low WSD (NS) as they are more likely to call a big bet at the wrong time.

We should aim for a similar stat to that for WSD perhaps a little higher as some hands will reach he river in limped pots with no action post flop.

This stat tells us how much money a player has won at showdown. This shows how a low WSD (NS) but a high WSD can lead to a negative W$SD. This stat can be somewhat misleading if you play across multiple stake levels as it is measured in $ and not BB. We also need a big sample size as one big pot over a 100 hand sample can skewer the data. So long as your W$SD is positive there isn’t really a number to aim for. If you have a flat redline (not losing money without a showdown) then this should represent your overal winnings and therefore be around 2-5bb/100 hands. With a negative redline this should be greater than that and a positive redline should be lower than that.

All of these stats cannot be used on their own as they will mean very different things for each player type. Therefore it is important to combine these stats with each other and other stats!
Follow
You need to be logged in to follow an article.