Small blind poker strategy is a bit different in comparison to the other positions. Minimize your losses here by knowing how to play poker properly from SB.

The SB is unfortunately one of the least profitable places to be at the table. We are forced to give up a mandatory 0.5bb without even seeing our hole cards, and are guaranteed to always be out-of-position postflop!
Even strong winning players will make losses from the SB. Assuming that we folded every SB we’d be losing at about -50bb/100-hands. If we can limit our losses by improving this winrate to around -15bb/100-hands we are doing reasonably well.
Hence the name of the game in the SB is not to make money, but to lose as little as possible. Like all positions, the better we can play, the higher our overall winrate will be.

One of the most common mistakes players make with their SB play is not understanding that the SB and BB are dramatically different.
If you are currently using the same strategy from both positions, then you are not maximising your expectation. So what is the main difference between the two positions?
So why do we flat tighter in the Small-Blind compared to the Big-Blind? There are 2 main reasons.
As a result, some players have adopted a “3bet only” strategy from the SB. This is not an optimal strategy and it’s recommended to have a flatting range. However when executed well a “3bet only” strategy can still perform reasonably well and will only be slightly inferior.

Another situation that can occur in the SB that will not occur in the big-blind, is when everyone folds to us and we get the opportunity to raise-first-in.
It’s recommended to open around 36% of hands in this case. 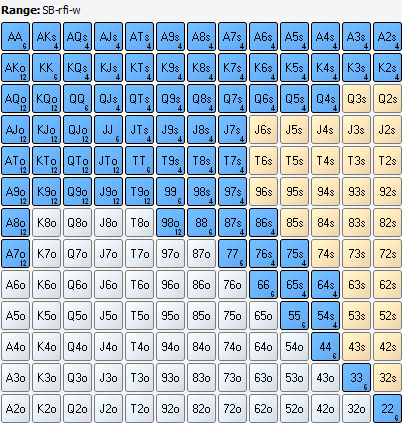 In practice it should be possible to open a little wider, at the very least including any Axo hand.
It’s very important that we are looking for exploitative opportunities in this situation since many players are not defending their big-blind optimally. We should be making use of our opponents fold-BB-to-SB-steal stat. If this stat is above 60 then we can open any 2 cards profitably from the SB for a 2.5x sizing.
Assuming our opponent is unknown we should stick to around 36% of hands, but since we will be exploiting many tight big-blind players it’s possible for our SB rfi in stat to become over 50% across a big sample in our tracking software.
Opening very wide from the SB should be done with reads however, and a common mistake players make is to open too wide vs unknowns. This is very profitable for decent players in the BB.

We should be very aggressive when defending against a BTN open. Many players are opening the BTN extremely wide in today’s games, sometimes as much as 100% of hands.

Notice that there are 4 different colours used on the grid below. 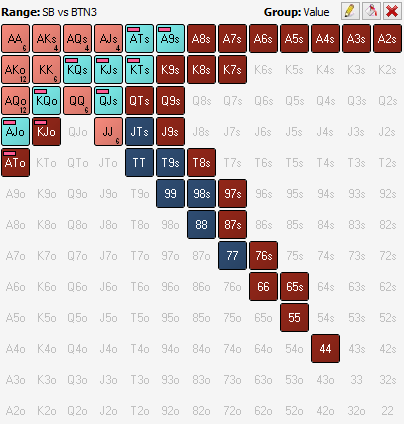 This strategy makes use of a reduced cold-calling range without removing it entirely. Hands like 77-TT nearly always play better as cold-calls but it would be incorrect to purely defend these hands by calling. We’d be playing very face up if our opponent knew that we always had 77-TT when we cold-call. So it’s important to diversify our calling range with a few suited-connectors and suited-broadways!
By the same token we wouldn’t want to always call hands like KJs since we may make ourselves vulnerable to squeezes plus the hands make a little more money as 3bets on average.

Notice that this is now facing a 3x open as opposed to a 2.5x open. Many players open a little smaller from the BTN compared to other positions. It’s important to keep in mind that our defending frequency is heavily affected by the open-raise sizing our opponents use. The larger they make it, the less often we should be defending. 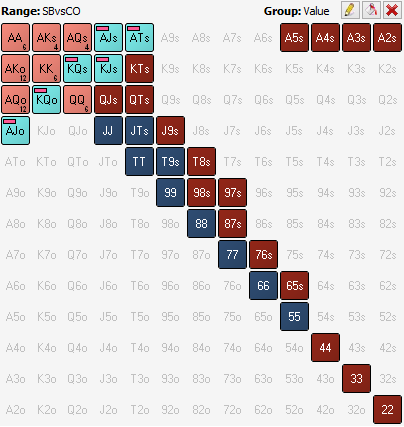 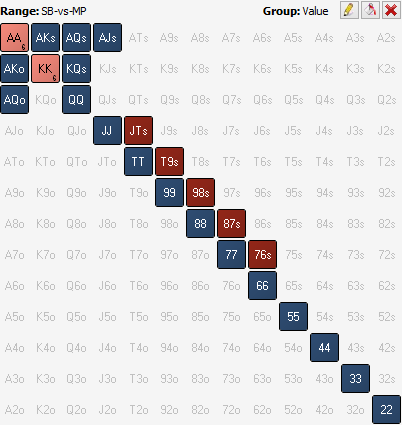 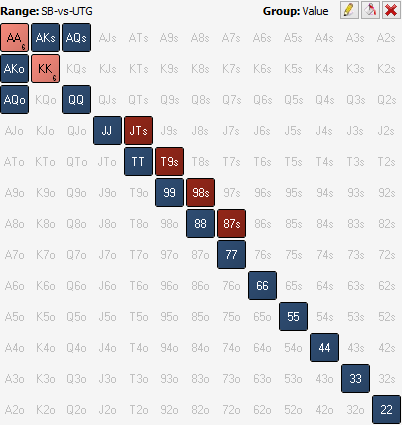 Note that in some cases it might not be correct to defend the lower pocket pairs if BB is squeezing very aggressively. However since most BB players are not squeezing that much when the opener is in UTG/MP we can get away with set-mining all pocket-pairs. We benefit from the fact that UTG/MP has a tight range, increasing the likelihood that we get paid off if we hit.

In tough games it can be better to defend something like 66+.

In general we want to be iso-raising a reasonably tight range since we will always be out of position. It’s recommended that we iso-raise something such as the following vs limpers. 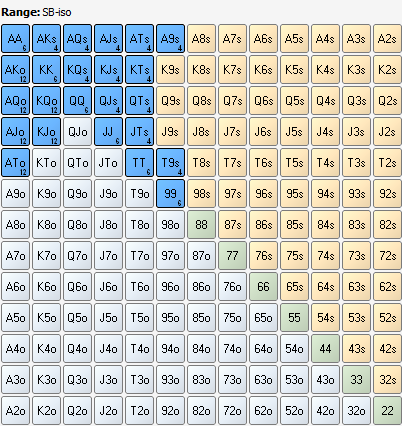 However, keep in mind that we have another option against limpers, which can actually be a pretty strong play, but many players ignore. We have the option to complete. This can be a great way to see many flops against weaker opponents for a good price.
We can actually get away with completing the SB much wider than many players imagine. The following range can be considered. 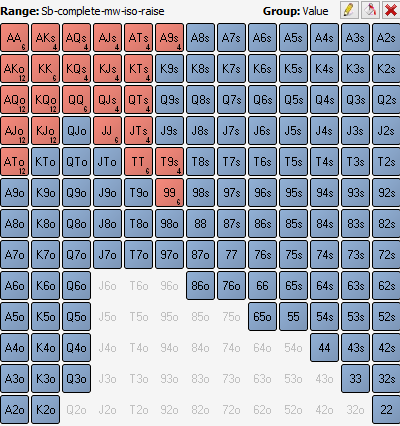 When we complete from the SB against 1 limper we are often putting in about 1/6th of the pot in order to see a flop. Since we get such a great price preflop it essentially means that we don’t need to do too much postflop in order to make the overall situation profitable. We can literally wait until we hit the flop and then look to make money from the weaker players involved in the hand.This range somewhat assumes that BB is also on the passive side. If he is constantly iso-raising when facing a limp and a small-blind complete then we should consider tightening up the range. However we can also consider completing some premium holdings and going for a limp-raise.

This is an area of strategy that many players don’t fully know about yet. While for a long time it was considered correct to never complete in the SB when the action was folded around to us, many good players are now beginning to feel the opposite. Completing offers us an extremely attractive price and hence potentially takes better advantage of the blind structure.
Let’s start by considering a GTO version of this strategy which involves completing in the SB with a 70% range. 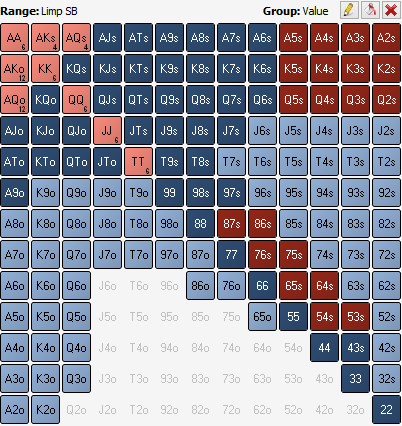 However, assuming we are playing against weak players it doesn’t necessarily make sense to be limping the SB with something like AA. We can potentially miss a ton of value this way. There is an exploitative version of the completing strategy which can be used at lower limits. 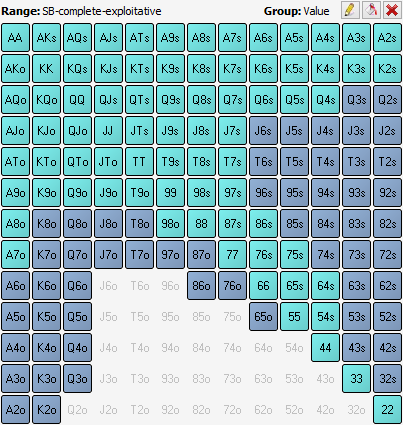 The idea here is that we are raising first in with our standard 36% range and then completing an additional 34%. Naturally this is an unbalanced strategy since every time we complete, it indicates that we are weak and will be folding. However most players at the lower limits are not competent enough to pick up on this and exploit us.
Assuming our opponent in the BB is especially weak it can make sense to complete all remaining hands. So against bad players in the BB we can play 100% of our holdings from the SB when the action is folded round to us.
This is especially useful if the player in the BB does not have a full stack. It’s just not going to be correct to try and open raise something like 85o in the SB when the effective stacks are 35bb. However folding is not a great option either since we want to be playing as many hands as possible against the weaker players. 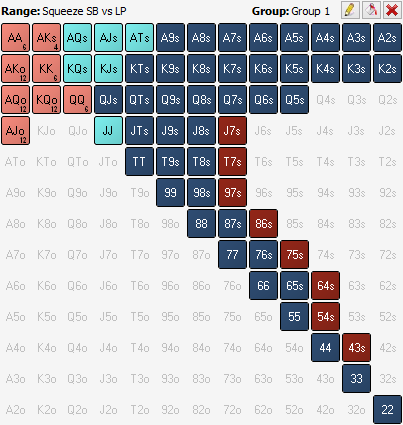 Remember that this range is just an estimate however and should be adjusted based on a number of factors.
If the big-blind is quite aggressive we likely want to narrow our overcalling range, since we don’t want to overcall a whole bunch of hands and end up getting squeezed off them.
However, assuming the BB is passive we can expand our overcalling range and follow a very similar strategy to the one that we would typically use in the BB when facing multiple opponents.

If we could make a few general guidelines for SB play they would probably be as follows.
If you use the guidelines given in this article you should have a reasonable idea of what to do in the majority of SB situations!

If you enjoyed reading this article, check out our other top recommended articles by Adam Jones!
Or why not take a look at some of Adams PokerVIP coaching videos?