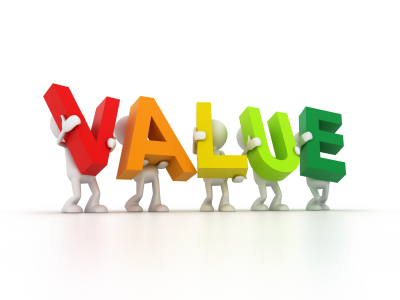 Earning the maximum possible value from your opponent when you're ahead is what separates good poker players from great ones. Oftentimes an opponent will check down vs. you with a better hand when you would have been happy to pay him off - this is missed value for your opponent. Savvy players are experts when it comes to thin value bets.

Just about everyone understands that on this flop A9 is a strong valuebet, and most players understand that our hand is still a valuebet on the turn.  After all, the overwhelming majority of BB's range for check/calling the flop will be worse pairs, and very little of it contains a K.  However, this is still true on the river, yet many players miss this thin, but profitable bet.

Why is this bet profitable?  First off,

we should have the best hand here very often.  Unless BB is floating a lot of Kx hands on the flop, which would be very unusual, BB has something like 14-30 combinations of Kx hands (some two pairs and some overcard floats).  BB rarely has Qx as well, since this would pretty much have to be Q9, as few players play q5 preflop.  So let's assume for now that BB has about 35 combinations of hands that beat us.  There are 36 combinations of J9, T9, and 98 alone, not to mention other 9's, 5's, 4's, and pocket pairs.  Given that both the turn and river are scare cards, and there are many possible missed draws in our range, most villains are very likely to call with any of these bluff-catchers.

When considering a thin value bet, remember that we do not have to beat every hand in our opponent's range.  When we valuebet in position on the river and get a fold, we gain (and lose) nothing, since we had the best hand anyway.  When we get called, we gain our bet when called by worse, and lose our bet when we get called by better.  Therefore, we only need beat more than half of the hands that call for this bet to be +EV.

This means that on our thinnest valuebets we will valuecut ourselves pretty frequently, but these bets will still be making us money and adding to our winrate!

The ability to read your opponent's range remains key

The better we know our opponent and his range, the more and better we can valuebet.  For example, if our opponent will always bet top or second pair on the river when the turn checks through, we should be valuebetting our third and maybe fourth pairs depending on how much he will have (and call) weaker pairs and A highs.  This highlights an interesting point, which is the more our opponent valuebets, the weaker his range will be when he doesn't bet, and therefore the thinner we should be willing to valuebet ourselves.

As another example, some opponents will always call twice with A or even some K highs on boards like Q33 rainbow.  So if we have 54 and hit a pair on the turn, we should be valuebetting.  By paying attention to showdowns and taking careful notes, we can really tune our value ranges to our opponent's tendencies and profit.  .

I tend to default to valuebetting very thinly until I get better reads, since most opponents default to calling pretty light (either because they are weaker players or because they want to see what I have early in a match)