We likely have the best hand and believe that our opponent is calling with a worse hand often enough. 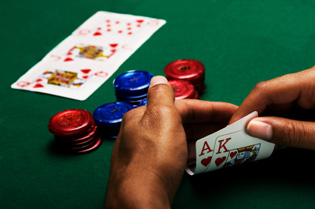 When do we bet for value?

You have a made hand and believe your opponent will be calling with worse. In order for a value-bet to be profitable, after your opponent calls he needs to have a worse hand more than 50% of the time.

Effective stacks are 100bb. You raise to 3bb in the CO with ak. BU calls. SB folds. BB folds.

(This is a good spot to fire a  continuation bet for value on the flop. There are large number of worse hands in villain’s range that will call. Any worse K, any straight-draw, any flush-draw. The times your opponent has a hand like KT, or 22, he will likely let you know by raising this semi-drawy flop.)

(This turn card doesn’t change a huge deal, but there are some additional draws your opponent could have picked up like jq, 89,a10 etc. Given that your opponent flat-called the flop he likely doesn’t have you beat, and this an excellent spot to fire a second barrel for value given the huge amount of draws and worse made-hands he can call with)

The river is 9. Hero checks.

(This is probably one of the worst cards for you. A large amount of villains drawing range consists of JQ and hearts, both of which get there on the 9 river. The fact villain might have you beat is only part of the problem however. Even if villain hasn’t made his draw he will be concious of the fact that some of your barrelling range includes these draws. He will therefore be folding a lot of hands you might hope to otherwise extract value from.

There is a decent chance he will muck hands like KQ/KJ on the river, and definitely any worse hands like Tx or JJ/QQ that may have been profitable bluff-catchers on the flop/turn. As a result when your opponent does call/raise he is likely going to have a better hand than yours more than 50% of the time. This is not really a spot where you can value bet the river against the vast majority of opponents.)

We’ve put together a few tips for the more inexperienced players to try and ge...

Why Cash Games Are Great During a Major Live Poker Festival

Sometimes, in poker at least, it’s better not to follow the crowd and take a l...