Stars vs 888 – Analysis and Conclusions

This was by no means a perfect experiment, but should serve as a very good rough guide for where it makes the most sense to play.

Let’s recap on the results of both grinds. 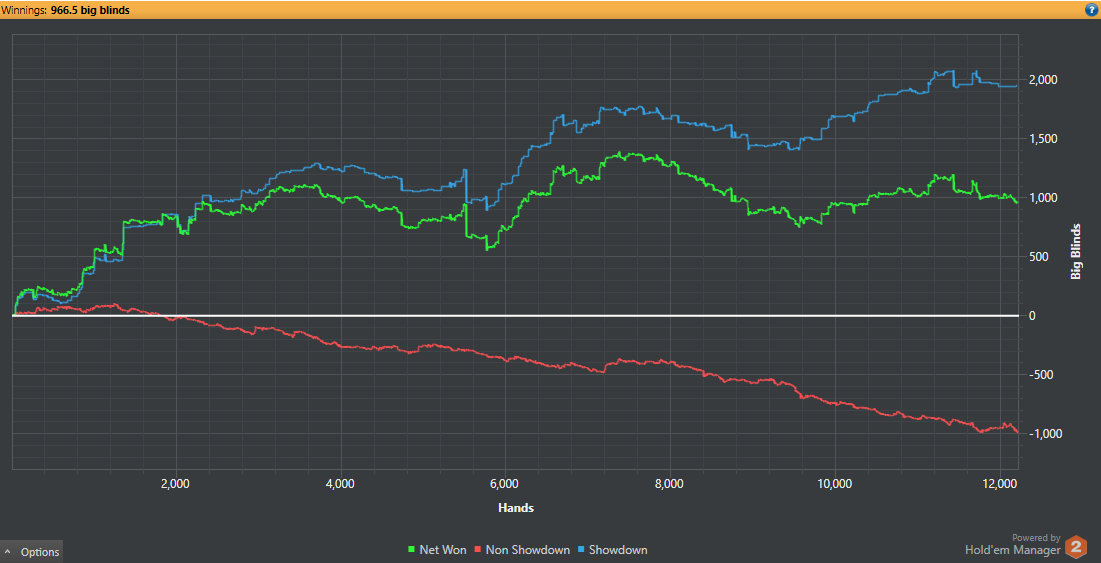 This certainly doesn’t constitute conclusive proof that 888 is softer than Stars, but there is a definite likelihood. When combined with other general observations and analysis, we can almost state for certain that 888 is a softer network.

There were certain lines that happened frequently at 888 which occurred with a much lower frequency at the PokerStars network. For example, min-bets and donk-bets were common place. We even considered hands in the 888 grind log where our opponent flops top set and proceeds to min-bet.

While min-betting is not always a completely incorrect part of poker strategy, a large amount of min-betting is general a strong indication of soft games. The same can be said of donk-betting (betting OOP on any street into to preflop aggressor). It’s not always incorrect, and does have a place in good poker strategy. It’s not used super frequently in tough games however, so a high frequency of donk-bets is a good general indication of weaker games.

We noticed in general our opponents were more inclined to call overbets with worse hands, re-raise for value with overly weak hands, and randomly overbet shove all-in at 888. This could of course be a product of variance, but when we put everything together, the overwhelming likelihood is simply that 888 is a much softer network than PokerStars.

The frequency of open-limps was also significantly higher at 888 compared to PokerStars; another indication of soft games. We also experienced a larger number of multi-way pots at 888 in comparison to 888. This can be annoying and increase our variance, but again, an indicator of softer games. 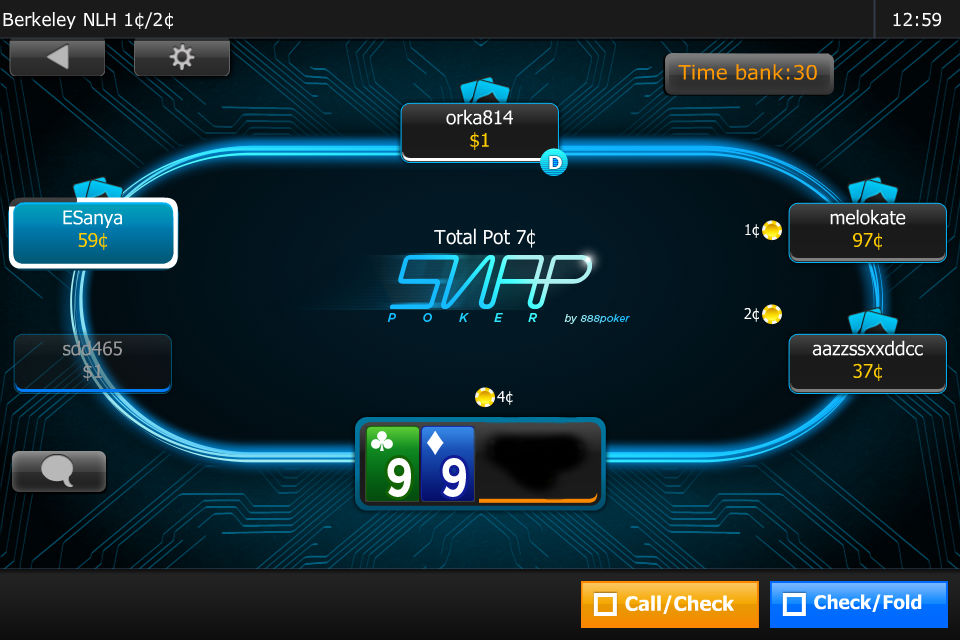 Winning felt reasonably straight-forward at 888, but difficult at PokerStars. There were times during the PokerStars grind where it looked as if we were not going to make any profit at all. It could be to do with the fact that we appeared to hit some negative variance (downswing) at PokerStars, but it’s also true that we ran bad in some spots at 888 poker. We lost a 270bb pot at 888 at one point which is a significant loss over a 12k hand sample, but we recovered quickly as a result of bad players donating their stacks to us. So it seems we maybe had an equal share of bad luck at both sites; it’s simply that there were far less donations at PokerStars making it harder to recover.

The original plan for the challenge was to play 4 tables of fast poker on each site. This is not possible on the 888 network. At least, it is not possible to play 4 Snap tables of the same stake, but it is possible to 4 table if one of the snap tables is of a different stake. For some reason it takes longer to transition between hands after fast folding at the Snap tables in comparison to fast folding at the PokerStars Zoom tables. The decreased volume capabilities at 888 may result in our potential hourly winnings taking a hit.

PokerStars Zoom supports use of tracking software and a HUD, while 888 allows use for tracking software but not the use of a HUD. This may either be an advantage or a disadvantage. For recreational players it can easily serve as an advantage since it diminishes the amount of predatory behavior that they may be subject to. (Good players having access to all of their statistics and information and using it to formulate exploitative tactics). It’s well known that large amounts of PokerStars hand-histories are available for sale meaning that a complete unknown can potentially have a large amount of information on us.

There is a popular (although clandestine) online service that allows opponents to look up our results and stats on PokerStars. Even if such a service was also available for 888 it would be of limited use in an environment that doesn’t support HUDs. 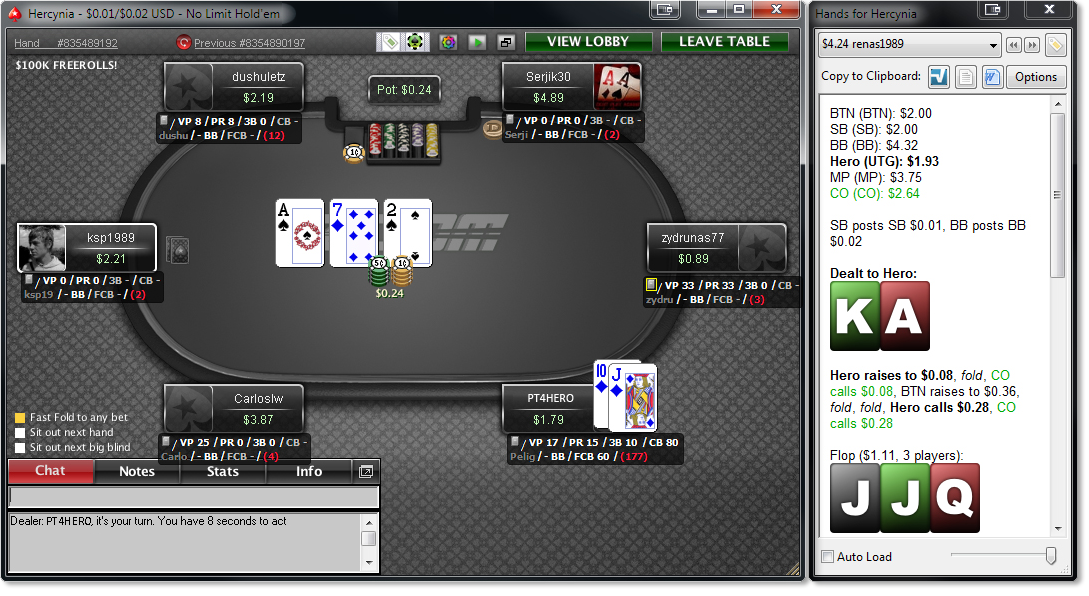 Rake is often measured in amount of bb paid per 100 hands, similar to winrate.

This works out at around 6.6bb/100 paid in rake on 888. This is actually extremely competitive. It’s worth keeping in mind that some of the more expensive networks can easily charge over 10bb/100 in rake.

PokerStars is typically known for its low rake, although there have been some rake changes recently. We have a slightly augmented sample here also. We have 16,000 hands on stars with a total rake paid of $86.15.

So we have paid 861bb over a 16,000 hand sample which works out to around 5.38bb/100 paid on PokerStars. So PokerStars is still slightly more competitive in terms of rake but only slightly. Given that we would expect our winrate to potentially be double on 888, the slightly better rake is not going to make enough of a difference.

Generally speaking, PokerStars also gives a large percentage of rakeback to its users through their VIP system than 888. Once again this difference is likely significant enough to make up for the much tougher games at PokerStars.

PokerStars offers lower rake and a better VIP system. It also offers faster paced games and less table caps making it easier to play a larger number of hands per hour. However, there is no comparison between the softness of PokerStars and the softness of the 888 network. It’s estimated that winrates of double or more may be achieved at the 888 network, which greatly outweigh any of the other benefits offered by PokerStars.

This is not to say that we will necessary make twice as much money at 888, because profits should be measured in terms of hourly-rate, not winrate. Our hourly rate will typically not be double, but it should be significantly high enough over the returns offered by PokerStars that the correct decision is somewhat straight-forward.

There is a reason why PokerStars still has much more traffic than 888, despite many players being at least vaguely aware of the above idea that other sites are significantly more profitable. Here are two possible reasons.

This was by no means a perfect experiment, but should serve as a very good rough guide for where it makes the most sense to play. A perfect experiment would involve having 300k+ hands on each site so we can gauge more accurately what exact winrates look like.

Previous Article in the Series