Poker vs Chess | Benefits of Playing Another Game

This poker vs chess comparison looks at the similarities between the games and how playing one or the other can improve your overall game and mentality.

To start with, I want to state that I am a huge devotee of both games, with no clear preference at this point in my life.
There is a lot of material aimed at chess versus poker floating around the internet which very quickly gravitated towards people needlessly defending the honour of their favourite. In this article I want to concentrate on the positives, what the comparisons can teach us and some interesting points which may change how we view each game. Let's get into...Poker vs chess!
I first learnt how to play chess at the age of four all the way back in 1981, and it quickly became a favourite pastime. It wasn't until 2005 with the Moneymaker effect in full swing, when I came across people discussing poker on an internet chess server. I'd never even heard about online poker before, the only cards I'd seen played on the internet were gin rummy games on Yahoo. Deciding not to bother learning with play chips, I made my first deposit and away I went! Little did I know that five years later I would leave my job and begin travelling the world playing poker full time with just my suitcase and laptop for company!

The Chess Player's Need for a Structured Learning Process

After you learn the rules of chess and a modicum of basic strategy, it becomes obvious very quickly how complicated and strategically rich the game really is. The effect of this is that you are forced to break down what you are studying to improve as a player into small manageable parts.
A chess game is broken up into an opening phase, the middlegame and the endgame, often with blurred lines between each phase. Depending on your overall strength as a player, each part has varying levels of importance as to what is best to improve next. Just as there is with poker, there is ample available information out there on which direction to take if you want to be a stronger chess player. It's so important to be studying the right things at the right time to make your learning process as efficient as possible.We all have limited time to some degree and if we want to get as close to our potential, as our life circumstances will allow, then not making the most of our study time is a wasteful setback.
Most of us have probably never appreciated how the peak performance we reach in a particular discipline is related to how well we master the fundamental skills as a beginner. If you were to ask any professional chess player what is the single most effective exercise you could carry out to improve your playing strength, they would answer 'solving tactical problems.'
This is so important for new chess players because it is how your visualisation ability is developed. Without being able to accurately move pieces in your head even a handful of moves forward you will struggle to get to grips with more advanced material. As you progress towards learning concepts which push you right up to the limit of your abilities, you will plateau at a much earlier point than if you had correctly structured your plan for improvement.
This situation is analogous with poker vs chess where poker players do not put enough thought into how they plan their study of the game.

If we want to build solid foundations to our poker skill set we must start with the most basic principles. The design of a structured training plan should begin with concepts such as why position is considered an advantage, which leads onto learning which hands to play, in which position and why. This is analogous to a chess player solving simple tactical puzzles. We need to have a basic pre flop strategy worked out before we start looking at sophisticated plays such as overbet river bluffs.
Not even all pre flop strategies are equal. I remember my first cash game coach telling me how a player had emailed him requesting help to design 'Game Theory Optimal' pre flop ranges for $2NL 6Max! Can you imagine how much time is needed to invest to finish such a project? More importantly how much improvement would this player have expected to see with their long term results? The answer is a lot of time spent for little to no real improvement to the bottom line.As you make your study plan in advance make sure that you target the 'low hanging fruit'.
Todays games are tough and you can't afford to be ignoring what are the easiest spots to master. They might not be the most interesting, but if your opponents understand them better than you then that naturally translates to them having a profitable edge over you. This should be unacceptable to you, don't be lazy about filling in the gaps in your knowledge. 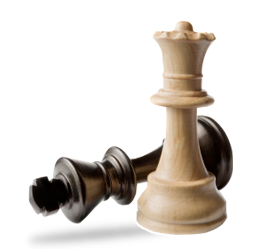 Amateur chess players today are notorious for this type of behaviour. There is a lot of quality chess learning material available to everybody, but an increasing amount is dedicated to the opening phase. This is the least effective phase to be working on once you understand the basic opening principles, but this doesn't stop people spending their hard earned on the latest Chessbase DVD analysing their pet lines.
My opinion is that this all describes lazy behaviour. These people want to win while not really taking part in the whole game. The $2NL player I mentioned above is probably dreaming about having these unbeatable ranges which might allow him to log on and win money without even having to think. The chess players who buy only openings material are dreaming about memorising just enough to be able to beat their opponents without having to think for themselves.
If a player of either game is thinking like this, do you really think that they love the game for what it is? Anybody who has been successful at poker will tell you that loving the game for what it is, was essential for them. You can't view the whole exercise as a money making idea, else you're setting yourself up for failure.If your results have been flat for a while, why not go back to basics and make sure that your foundations are sound. Make sure that you haven't ignored any aspects which could help your win rate, and make a solid plan for improving in the future.

From the Point of View of a Poker Player

Almost everybody who gambles in one form or another will be aware of the concept of variance, AKA luck. This leads to poker players being subjected to a lengthy wait until the results of their study and in-game adjustments are known with any degree of certainty. It may be fair to suggest that a high precentage of us are naturally impatient, and this creates some problems for those of us who work hard to improve as a poker player.
In chess it is fairly easy to see how complex the game is and how difficult it is to consistently make accurate decisions,whereas poker appears to be simple from first glances.
Of course nothing could be further from the truth, we all know that poker is incredibly complicated. Some people consider poker no different to playing games on a casino online. In fact without this deception and the aforementioned variance, the games wouldn't run because bad players would lose their money too quickly and without having any decent upswings, leading to them not wanting to play.
To improve steadily as a poker player requires some trust in your study plan, because of this waiting for your sample size to catch up, it is easy to lose confidence and start tinkering, which can upset your mindset with matters spiraling out of control quite quickly. If you have solid foundations then the learning process will be a lot smoother than otherwise, and looking at chess vs poker you won't plateau until a much later point.

One of the major differences when comparing chess vs poker is the rating system. Having played chess online for almost twenty years I've gotten used to my blitz rating being a fairly reliable indicator of my mental state. If I'm more tired than usual, or stressed to an unusual degree, the rating figure can drop as much as three hundred points, which is usually enough of a gap between players where the higher rated player would win more than eighty percent of the games, it's quite a considerable difference in terms of quality of play.
Having this information in front of you every time you play lets you know when it might be a good idea to take a break and come back later. But with poker we don't have any indicators like this. Every time you play a session in poor physical or mental condition your win rate is impacted, but you never see the results isolated. The poor sessions just blend in with all the good ones. Never be in any doubt that your bad sessions will affect you, just because it's hidden from you.

It's not enough to be a good player. You also need to play well.

Anyone who has a passion for poker can now take their first steps in the busines...

Poker apps are where online poker is heading in the future