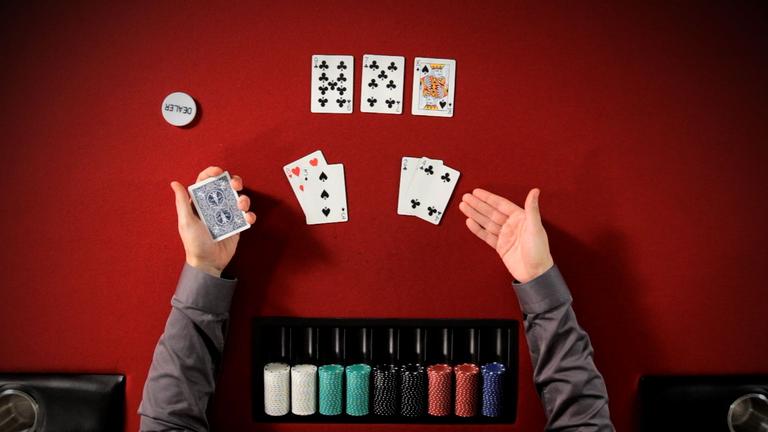 seen in the article on “bluffing” that the goal of a bluff is to get our opponent to fold a better hand. Semi-Bluffing is a type of bluff – but in a situation where we also have a chance of drawing to the best hand if we get called. We can hence distinguish between the two types of bluff

Pure Bluff – We have no shot of winning if we get called.

Semi Bluff – We have a chance of winning even if we get called.

It is not technically possible to semi-bluff on the river – by this stage we either have the best hand or we don’t. River bluffs will always be pure-bluffs. On any other street it makes sense to semi-bluff more often than pure-bluff. Semi-bluffs will be more profitable in the long run and don’t need to work as often.

Which Hands are Semi-Bluffing hands?

Typically players think of semi-bluffing hands being flush-draws and straight-draws. This is certainly true.

In reality we can semi-bluff with anything that might improve to be the best hand by the river. This includes some made hands.

It’s true that we might have the best hand after we flop bottom pair. We could legitimately think about checking-back the flop. If villain bets the turn however, it might be difficult for us to continue. We would also be letting our opponent see free turn and river cards with any of the over-cards he might have.

If villain did have a hand like 44-66, 88-JJ there is a chance he may actually fold some of these to a continuation bet. This is also a good board to bluff seeing as it is dry; there are less hands our opponent can have.

If he does call the c-bet out-of-position there is a decent chance our bottom pair is not the best hand– but we still have 5 outs that may be good – any Ace or Three. If one of these cards hits we can continue betting on the turn, purely for value.

Sometimes we may not have any direct draws or pairs but should be aware of back-door draws. (A back-door draw is where 2 running cards are needed to make your hand.)

For example, which is a better situation to bluff?

Even though both flops have a similar texture, we have a better chance to improve on the first flop. We will also be able to continue semi-bluffing on the turn when we improve our draw.

When should we Semi-Bluff?

In general the same rules apply here as they do to bluffing.

Don’t try and fold out huge fish or calling-stations. It doesn’t matter if we have a flush-draw, it still won’t be profitable. If we have ~33% equity against our opponent’s range and he is never folding, we are simply putting additional money in the pot with the worst hand. If we have a nice draw against a calling-station, we should usually just check and hope to make our draw.

Target players capable of folding. As discussed in the article on bluffing, these will often be the slightly better players with a TAG image. They are good enough to know when we are representing a strong hand and can make folds. (But not so good they play back at our semi-bluffs effectively.)

There is no point semi-bluffing if we think our opponent is very strong. If he is a nit and re-raised us pre-flop, he probably has a strong hand. Against strong ranges we want to play our draws passively. Against weak-ranges we should play aggressively.

Bluff with the worst hand. If there a chance our hand might be good, sometimes it can be a better option to play passively. Perhaps we hold QhKh on an AhQc2h3c turn. We could certainly think about semi-bluffing in such a spot, but our hand is good so often it might make more sense to take a pot-control line and check. If we hold 3c4c on a KcQc7s flop we know our hand is never good, and even if our opponent folds a random hand like 8s9s, we have gained something. (In reality 3c4c has 53.4% equity in this scenario, but it is still the worst hand on the flop. Against our opponent’s range 3c4c will have less than 50% equity.)

In this example we flop a flush-draw after open-raising pre-flop. Against huge fish and calling stations we could think about checking here. We have 6 high after all, and our opponent will often have a better hand even if he is holding random garbage.

We think our opponent is tight-aggressive and reasonably decent however. It is an excellent spot to semi-bluff.

We should be able to take the pot down reasonably often – and if our opponent does wake up with a made-hand we will still have some equity.

We don’t necessarily expect our opponent to fold a King/Set/Pocket-Aces to a second bet, but anything else in his range he could potentially lay down. This includes better flush-draws; the hands we have the least equity against. The 4 on the turn gives us an open-ended straight draw increasing the profitability of a semi-bluff yet further.

Love it when a semi bluff gets there and villain can\'t put you on the correct range of hands. Do you guys follow through with the bluff if you brick the river?