Using a HUD - Which stats to use?

The HUD - a world of numbers and stats, but which ones should we use? 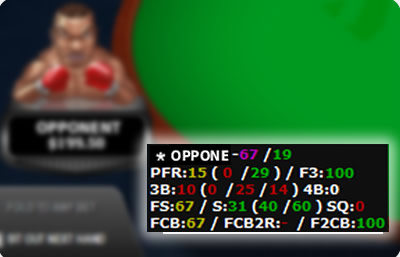 What is a Poker HUD?

HUD stands for ‘Heads Up Display’, and when an online poker player refers to their HUD, they are referring to the display which is shown over each opponent when running poker tracking software such as Poker Tracker 3 or Hold ‘Em Manager. The HUD gives you the option of viewing various statistics on your opponent based on the information which your tracking software has gathered from that opponent from previous hands played with him/her.

Why use a HUD?

HUD allows you to keep track of a large amount of data over a long period of time (something the human mind struggles with). You can analyse this data post-game in an attempt to formulate effective strategies. A HUD also allows you to multitable efficiently. If you are playing a large amount of tables you may often miss a lot of the action. This information is not lost seeing as it is assimilated by your tracking software.

There are a number of limitations to using a HUD, but first we will consider some of the most common stats players like to use.

Which Stats should I use on my Poker HUD?

Below is a Glossary of HUD statistics you have at your disposal.

VPIP – Voluntarily put in pot. This is a percentage representing the total amount of hands someone plays. Checks in the big-blind are not included. This stat is a useful indication of how tight/loose someone is. A VPIP of 10 is very tight, while a VPIP of 30+ is quite loose.

PFR – Preflop raiser. Similar to VPIP, but describing the % of time a player has taken an aggressive action preflop, whether it be open-raising or 3/4/5 betting. This number will always be lower than VPIP seeing as any time someone is the preflop-raiser they are also voluntarily putting money in the pot. A PFR of 6 is very tight while a PFR of 25+ is quite loose.

AF – Aggression factor. Represents how aggressive a player is. It is a ratio expressing aggressive actions (bet/raise) to passive actions (calling). Checking or folding has no effect. This stat describes how a player puts money into the pot assuming they wish to continue with the hand. An AF of 3 would imply a player bets/raises 3 times as often as he flat calls.

FtCbetFlop – Indicates how often a player folds to a continuation bet on the flop. It is useful for establishing how often you cbet, and with which ranges.

3betPf - % of times a player makes a 3bet preflop given the opportunity. 3bets can occur on any street but this stat deals with preflop 3bets only. Any time there is a raise + reraise preflop, it is referred to a 3bet . (The first bet is the mandatory big blind.) A 4% 3bet or less is usually tight while a 3bet of 8% or more is quite loose.

Ft3betPf - % of time a player folds to a preflop 3bet given the opportunity. Useful in calculating the frequency and ranges with which you will play 3bet poker.

ATS – Attempt to steal. This percentage is similar to PFR but applies specifically to open-raises from CO, BU, or SB. A high ATS means a player is making steal attempts very frequently, while an ATS similar to PFR may mean the player is not positionally aware.

Afq – Aggression frequency. Indicates the percentage of times a player takes an aggressive line given the opportunity. This differs from AF because any action which is not an aggressive action (betting/raising), is now considered a passive action. It therefore counts checks/folds as passive actions. Afq can be used in conjunction with AF to deduce some very specific information regarding villain’s aggression/tendencies.

CbetTurn – Percentage of the time a player fires a cbet on the turn. I.e he raises preflop, cbets the flop, and then bets the turn. Useful in establishing how you respond to second barrels, but possibly has limited use in isolation seeing as it is dependant on other information such as PFR and CbetFlop.

FtCbetTurn – How often a player folds to a second barrel on the turn given that he called the flop. Useful in establishing how frequently you cbet the turn.

Donk Flop - % of the time a player bets the flop OOP after being the preflop caller (given the opportunity). Useful in establishing how you respond to donk bets. Some players rarely donk-bet, while others may donk-bet with a very high frequency.

CRFlop - % of the time a player check-raises the flop given the opportunity. Useful in establishing how you respond to a flop check-raise. Some players rarely check-raise while others may check-raise with a much higher frequency.

# of Hands – Shows the number of hands you’ve recorded against a specific player. The other starts are only useful if you have a decent sample size of hands. Some stats like VPIP converge to their true vale after a small sample, while other stats, especially those involving later streets, take much longer before they become accurate.

Popups – You will often find most tracking software allows you to hover your cursor over various stats, and a popup will then break these stats down by position. This is useful because someone’s VPIP/PFR may vary extremely widely depending on whether they are UTG or on the BU.