How to Use a Poker Variance Calculator: Guide & Review

Using a poker variance calculator is a skill that every poker player should have. You can calculat the variance for different stakes, tournaments, and see if you can handle it.

The fact or quality of being different, divergent, or inconsistent”

As soon as I first picked up the game back in 2005 it was obvious just how painful my relationship with luck was going to be if I ever wanted to play this game for a living. Looking back from today I really had no idea just how bad things could possibly get. Come to think of it, neither did the entire poker community!

My first poker experience came through online MTTs, and the standard advice back in the day was for professionals to have at least one hundred tournament buy ins in their bankroll. Little did we know that this was to prove way too cavalier. Especially as the games became tougher and tougher.

These days people are now more likely to suggest at least three hundred buy ins for tournaments, and at least fifty buy ins for NL cash games, with PLO needing even more. This is not conservative either, it's supposed to be a basic minimum.

I can say for certain now, as an eleven year veteran of the game that variance is still not understood by the vast majority of casual players. The main problem being that they are not able to play the volume required to ride through the swings in reasonable time, with a downswing lasting months,maybe years rather than weeks for cash game players. Recreational live tournament players will possibly not even manage to play enough over the rest of their lives to get any kind of an accurate understanding of just how good they are.

So how can we better understand the variance we can expect to experience?

The only way to make a serious examination, unless you have thousands of different databases, is to use an online variance calculator.

What Does a Variance Calculator Do Exactly?

The calculator is a tool which can simulate millions of hands or tournaments, and scientifically show us the results from a best case scenario to the worst case.

It is never going to prove anything with one hundred percent certainty, but it will show us close enough to suit our purposes giving us an idea of just how much luck is involved, and what kind of time scale is involved to play through an average downswing.

By inputting various statistics from our database we will also be able to see over a particular sample size what percentage of the time we can expect to be in profit. Along with advice on required bankroll size to stay within a reasonable risk of ruin percentage.

In today's tougher games, much is being said about how the mental game side of poker is becoming more important to maximize your results.

What better way to prepare yourself mentally than to know in advance just how bad the bad runs can be. If you're ready for the hard times then they won't hurt you as much.

The best application out there today looks to be here.

Let's take a look at how the cash game calculator works.

Here I want to use as an example a recreational player who works full time so only finds time for 25000 hands per month. This player has a decent win rate of 2.5BB/100. Not to be confused with BB/100 which is twice the BB/100 that you need to enter.

Here we can see some samples showing that even being a decent player, over a small sample size of 25000 hands there's still a fairly high chance of losing money. 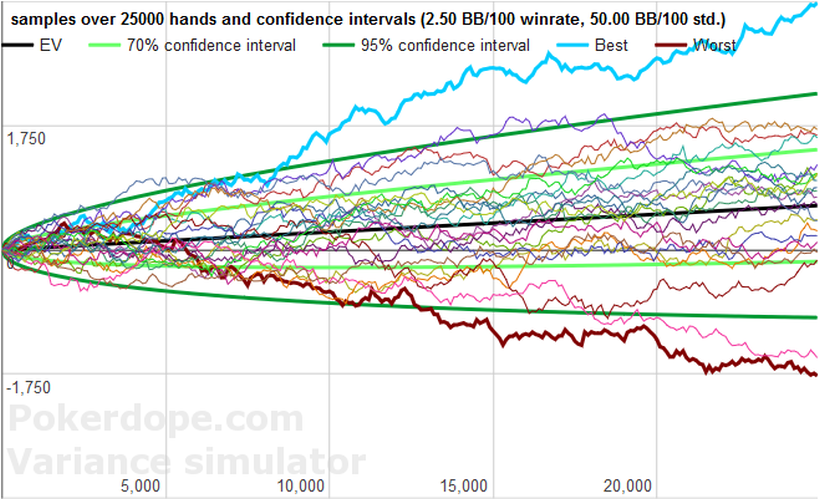 There is also a report showing some useful metrics. 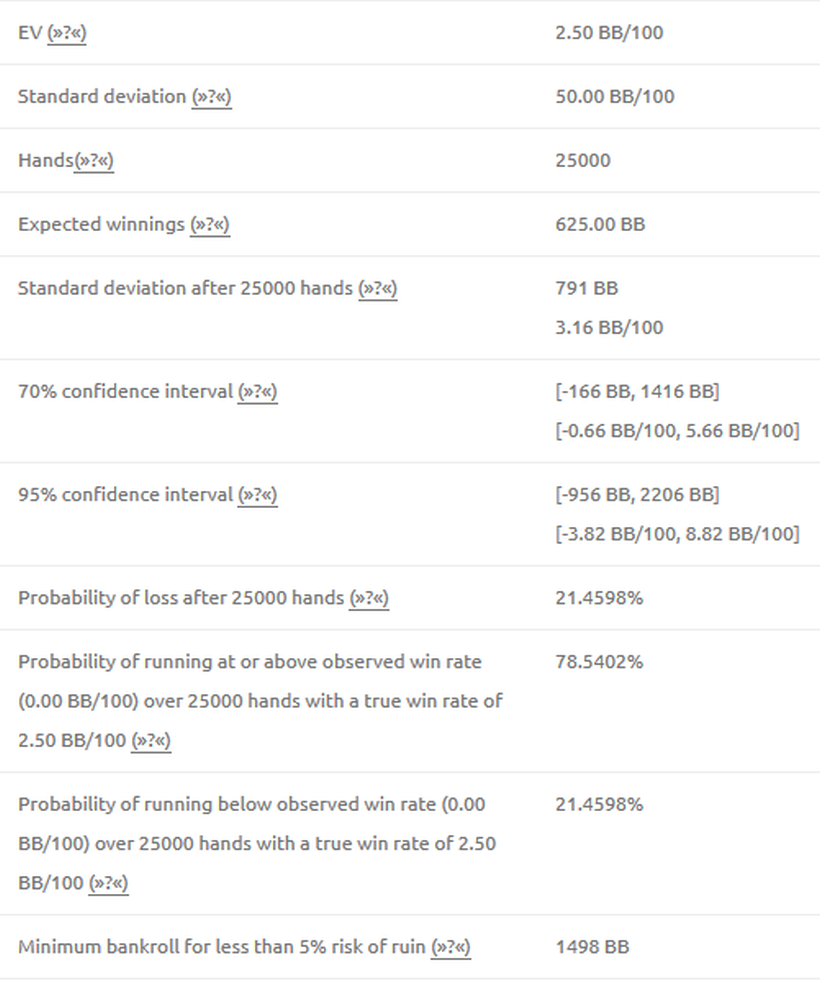 As we can see from all this data, 25000 hands for many casual players can take quite a long time to play, and even if they know they are decent enough to win well in the games they play in, there is still a high chance of being down money.

Have a play about with different win rates, standard deviations, and sample sizes to get a better understanding of what can happen.

The best application out there today looks to be here.

Even new players  to the game who read about poker, and study the game to any extent will likely have heard about the extreme variance experienced by MTT players.

In this example our hero is a recreational player who finds time for 1500 tournaments in a year.

HisROI % is a healthy 35%, but nothing spectacular. He plays only $5 buy in events with an average of five thousand entrants. Each tournament pays out prizes to the top fifteen percent of finishers. 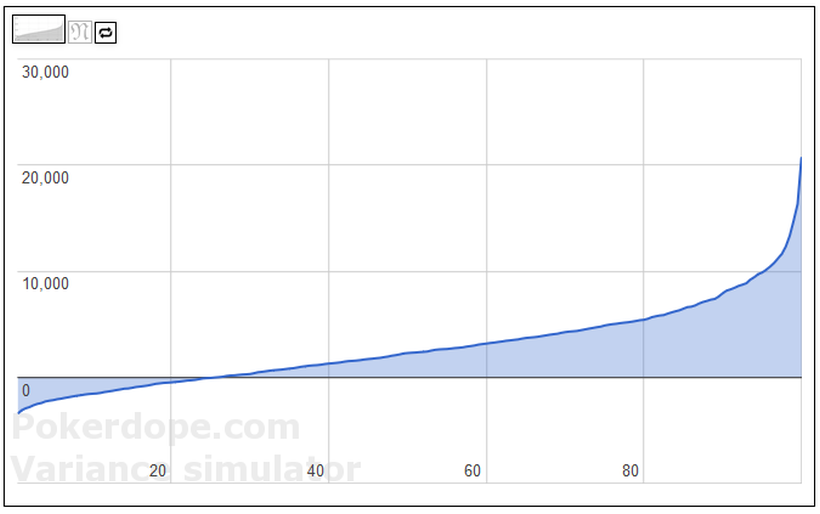 Here we can see that there is roughly a twenty five percent chance that he will be down money at the year's end. Fifty percent of the time he can expect to have won more than $2285, with the worst case being a total loss of more than $3400.

Can you imagine what an unprepared casual player would be thinking if they had lost $3400? This is why we need to do this work away from the table.

Here is a random selection of twenty samples. As you can see there is still the possibility of going on a huge heater and making a nice profit. But there's no guarantees! 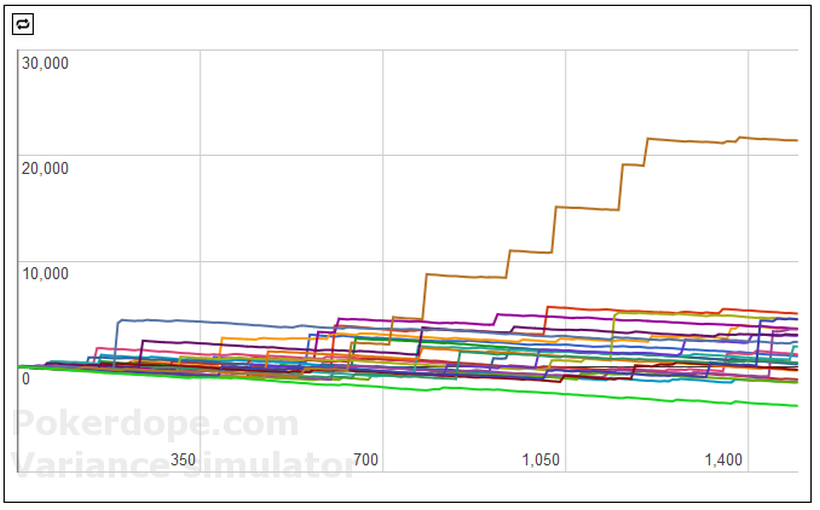 Similar to the cash game calculator we also get a detailed chart of statistical data. 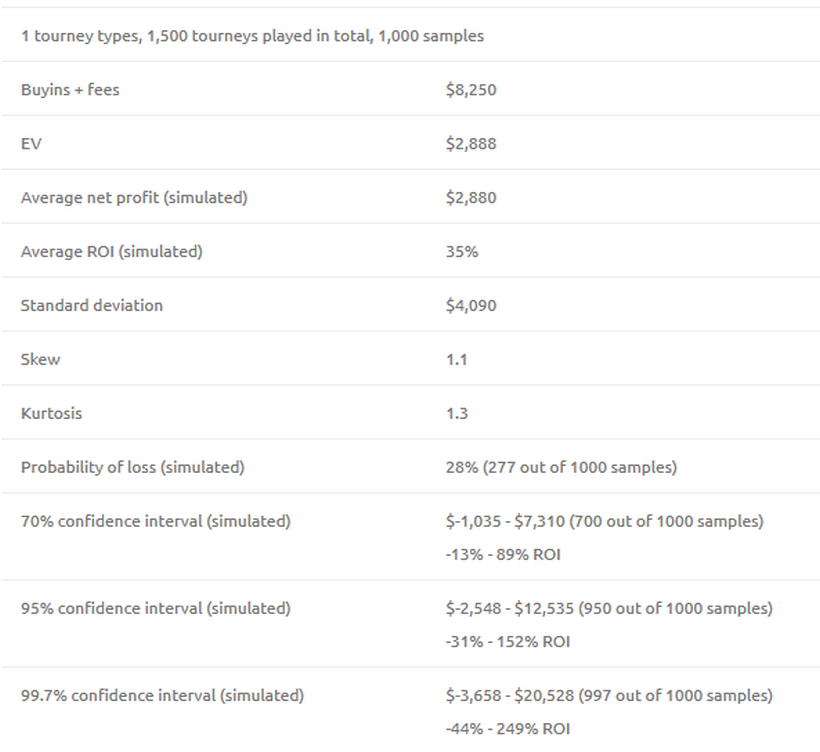 In both examples we saw a competent player stand a fairly high chance of losing money over a single month,and over a full year.

Once you have experimented with different permutations you may even wish to change your game of choice. One point which stands out more than any other is how live poker players need the patience of a saint. They simply cannot look at poker in terms of months. Even for the professionals only hardcore cash game grinders can expect to feel a degree of certainty after a year's play. Live MTT players can expect a long wait, there just aren't enough days in the week.

For online players the long run can come around much sooner, but for those of you with jobs and family commitments it can still be a frustratingly long time before you see the fruits of your labor.

Variance is a fact of life for any poker player. Now it's time to understand it and to deal with it. All the numbers you need to know are available from your database. Dive in and have a play around.