Have you heard the term Nash Equilibrium thrown around, or used a few of the charts yourself? Learn what it means here.

Nash equilibrium is one of the most ubiquitous terms in game theory. It's used everywhere from meetings in small companies through poker strategy materials to the movie "A Beautiful Mind". The term gets its name from John Forbes Nash, Jr. a brilliant scientist responsible for many breakthroughs in economics, mathematics and game theory. Basic understanding of the Nash equilibrium can be invaluable in any non-cooperative game involving two or more players and poker certainly falls under that definition.

Let's start with a brief explanation of the game theory. According to the official definition, game theory is "the study of mathematical models of conflict and cooperation between intelligent rational decision-makers". It's the study of human behaviour in strategic settings that has wide applications in economics, psychology, computer science, poker etc. Now that we know what game theory is let's take a step back and figure out what constitutes a "game". To have a game you need at least two players, some incentives to play the game (clearly defined outcomes for the players) and rules.

Another official definition tells us that "In game theory, the Nash equilibrium is a solution concept of a non-cooperative game involving two or more players, in which each player is assumed to know the equilibrium strategies of the other players, and no player has anything to gain by changing only their own strategy." In the poker context, it basically means that there's no point in playing anything but the game theory optimal strategy if we know our opponent is also playing a game theory optimal strategy since we can't exploit the GTO strategy.

To further simplify the idea of Nash equilibrium, let's look at a classic example of prisoner's dilemma. In the hypothetical situation, two people are questioned separately about a crime they both committed. If they both confess to committing the crime they will spend 8 years in prison. If they both decide to keep quiet they will get locked up for a year on some minor charges. If the first player decides to confess (giving up his 'friend' in the process) and the second one lies, the first one will walk free and the first one will spend 10 years in prison (and vice versa). 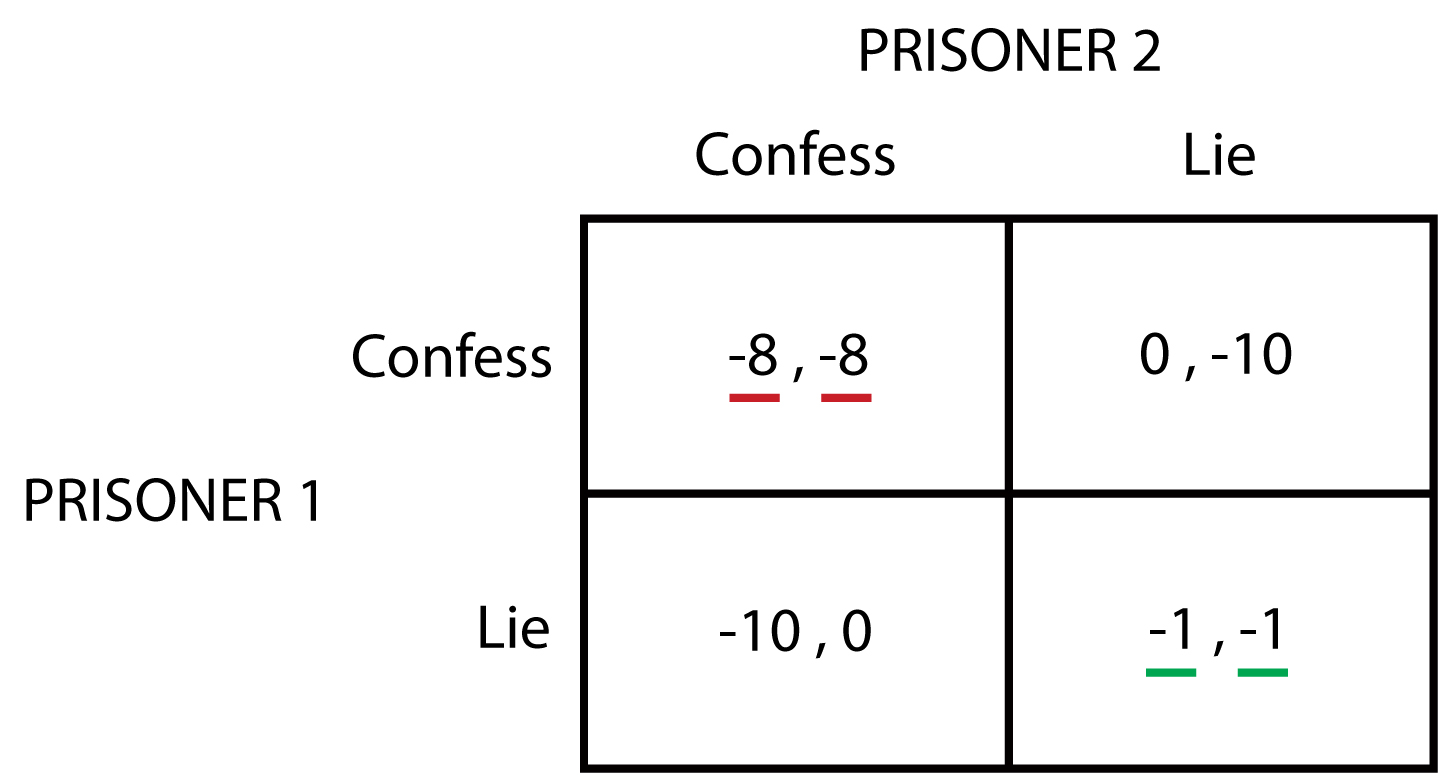 As a poker player, you can easily determine the best strategy in this situation. It makes the most sense to confess since both risk and reward of that play are higher for you than the alternative regardless of the other player's choice. In this particular example confessing is the Nash equilibrium since if we knew that the other player will confess we can't punish him for that play by changing our strategy, we can only punish ourselves. Of course, lying would be better for the group but poker is not exactly a group activity and that's outside of the scope of this article.

Poker is a very, very complicated game. Much more so than the hypothetical situation described above. That's why we still haven't figured out the game theory optimal strategy even for less complicated formats like HU Limit Hold'em (though we're somewhat close in this particular case) and judging from how fast processing power of computers increase from year to year, this won't happen anytime soon for the more complicated formats like 6-max or 9-max Holdem/PLO. However, if we greatly simplified the game and assumed that players in a HU game can only go all-in or fold in the SB position and call or fold in the BB position we can determine the nash equilibrium for that situation:

Here's how to use the chart. The numbers in both tables represent a number of big blinds you need to have to make a play (either push when you're
in the small blind position or call when you're in the big blind) and color coding represents suited hands, offsuit hands and pocket pairs to make the tables easier to read.
Just like in the hypothetical prisoner's dilemma if we knew that our opponent is following the Nash equilibrium strategy, we can't punish him for that choice and therefore, all we can do is to also follow the strategy. In reality, it's much more complicated than that. Players can, limp and use different raise sizes, they will also rarely if ever use the Nash equilibrium as their push or fold strategy and even if they do so, they will most likely start doing that closer to 8-10bb than 20bb stack size.

Imagine a player who's on extreme tilt near the end of your head's up match and decides to push every hand. We can call that player with a much wider range than Nash equilibrium would suggest. Conversely, if an extremely nitty recreational player is only willing to push premium pocket pairs no matter the stack size we also shouldn't stick with blindly following the Nash equilibrium table and instead punish his narrow hand selection with frequent small raises.

What is Nash Equilibrium Good for Then When it Comes to Playing Poker?

It's valuable in a couple of ways. It can serve as a baseline for our strategy. As the number of meaningful choices we can make in the game decreases (in the context of poker game this will happen as the stack to pot ratio decreases) it makes more sense to actually follow the equilibrium. While even in today's games we can still exploit players in HU even with stacks as low as 8-10 BB's it's actually not a bad rule of thumb to start using the Nash equilibrium table as our stack reaches that point, especially when we're just starting out or we're playing against a tough competition.

Nash equilibrium also highlights that exploitative poker is still the king since the equilibrium is certainly not the highest EV strategy even in this greatly simplified scenario of sub 20bb game where players can only push or fold.
That's a very important realization in the world in which players spell doom for poker every other week. While the part that game theory plays in poker will only get bigger as the game progresses and we shouldn't be ignorant when it comes to it, the good old fashioned exploitable strategies are still the way to go in almost every form of poker.