A basic yet comprehensive guide to Sit N' Go strategy and structure. 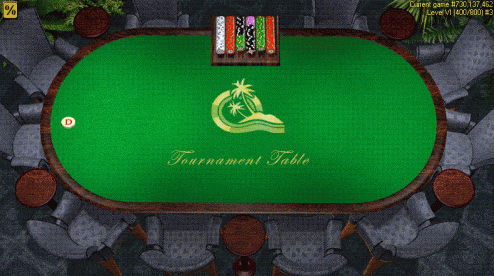 A SnG (sit n go) or STT (single table tournament) is a poker tournament that takes place over a short period of time and is usually played on only one table. The most common number of players to take place in a SNG is six or ten, although games with only two players or multi table sit and gos do exist. Reading about sit n go strategy can help you understand and profit more easily from these games. The level of thought and analysis can go quite deep but even a basic understanding of the concepts will give you an edge on the competition.

This article will be based around the six or ten person tournaments. It will be structured by briefly looking at the differences between sit and goes and cash games, followed by the three stages of a sit and go – beginning, middle and end game.

There are plenty of these tournaments to choose from with different structures. The most popular form are known as “turbo” SNGs – where the blinds increase every 4-5 minutes and usually take around 35-40 minutes to complete.

Faster paced games known as “super turbo” sit'n'gos are becoming increasingly popular as they allow professional players to play a huge number of tournaments with shorter blind levels. This means the middle and end-game will come quicker and this is where they will have the largest edge.

There are of course sit and goes which go at a regular speed or have larger starting stacks. For players who are starting to play sit and gos for the first time these are games which I would advise as there is plenty of play before you reach the stage where you may be at a disadvantage.

For many people who play cash games, the idea of a sit and go is strange.

When you play in a cash game the value of your chips is exact, by this I mean if the blinds are $1/2 then your big blind is worth $2 exactly. Throughout the course of a sit and go the value of your chips will change from the beginning to the end. Cash game players look at sit and goes and think it is a form of poker for worse players, this is because generally in a cash game you are playing deep stacked poker (100BB). In a sit and go you begin the tournament relatively deep stacked, and gradually the blinds will increase meaning a lot of the players will somewhat quickly have 10-15BB stacks. This is where the top players find their edge and is commonly referred to as ICM.

The early stages of the tournament

the early stages of a sit and go the best strategy is to play ABC tight poker; do not commit a lot of chips without a strong holding. A common mistake that you see regularly in the early stages of these tournaments is players over-playing marginal holdings and losing a large proportion of their chips, which will of course make things much harder in the later stages. An example of this is playing a large pot early in the tournament with an A-x type hand. Without a strong read you would be recommended not to play a large pot if the x is equal to a Jack or lower. The main reason behind playing so tight at this stage is to protect your chips for the middle and later stages, where they can be very useful in providing you with fold equity and +EV situations.

The middle stages of the tournament

By the time you have reached the mid-point in a sit and go a few players will have been eliminated and the blinds will have increased. The mid-stage is when players still hovering around the starting stack (1,500 chips is standard for almost all online SNGs) have around 15BBs remaining. This is the time when good players will start showing their edge. The best way to approach the mid-stages of a sit and go is to find situations where you can steal blinds (taking advantage of the Gap Concept) and keep your stack afloat.

In late position the good players will be prepared to open the pot with much more marginal holdings than in the early stages, this is purely in the hope of accumulating chips

During the mid-stages good players begin to 3bet-shove in certain spots. This means re-raising all in after someone has opened the pot. This play is extremely effective for accumulating chips as when called their hand is unlikely to be crushed in the long run, and every time the opponent folds they will add the raising chips as well as the blinds to their stack.

SNG prize structures are very top heavy. Heads Up play is the difference between a breakeven player and extremely profitable one.

Prize structure of a typical 10 man SNG. Seen from  BoylePoker  on the  iPoker Network.

The end-game in a tournament

end game of a tournament is usually defined as the stage when there are 3-4 players remaining, the blinds have increased again and we have reached the bubble. At this point there is almost no post flop poker played, this is because the largest stacks will generally have only 20-25BBs and the shortest will have under 10BBs. Players are attempting to steal the blinds as they are worth a lot in relation to stack sizes. The shorter stacks at this stage only really have one play – all in. They are looking for the most +EV situations to put all their chips in and win the blinds or double up. At this stage the larger stacks will generally dictate the action, as competent players will realise that everyone wants to make the money and exploit this. The larger stacks will generally be raising semi-regularly to amounts such as 2-2.5x in an attempt to win the blinds/antes and ensure that they have a nice stack when the bubble bursts.

A bigger stack putting a smaller stack to a tough decision by 3-Bet shoving on a min raise.

Once the bubble is over and everyone is in the money (ITM) there is still a lot of work to be done. The top sit and go players have a positive ROI (return on investment) from not only cashing regularly but also from placing high in the tournaments. A very common mistake that you will see is that as soon as all players are in the money people think it is over, you see big pots played with very marginal holdings in an attempt to gamble their way to a win. Although this will work on occasions, you should always be looking for the best spot to go all in and win. Obviously there are times when a very short stack makes the money and they have no choice but to get their chips in with almost any two cards.

Although sit and goes have lower variance than multi-table tournaments, this is not to say it doesn’t exist. Sometimes the very best players will have long losing and break-even patches. A good ROI for a SNG professional is anything over 5% and with a large sample (2,000 games minimum).

When starting your voyage SNGs, be sure to play tournaments with reduced variance as it will give you time to practice your play during each level of the tournament. The best players in this form of poker are the ones who can identify the stages of a tournament quickly and change their playing style accordingly. Always be looking to learn more about the game and study to improve your sit n go strategy.