Learn how to properly react to limpers and analyze this play that you may commonly encounter. Look for patterns and learn to to play against it.

And no, the answer is not to fist-pump followed by a short celebratory dance. In most cases it’s probably better that the open-limper has no clue that they are employing a bad strategy. So how can we maximise our profits against such limpers? The following is a crash-course on playing against limps. 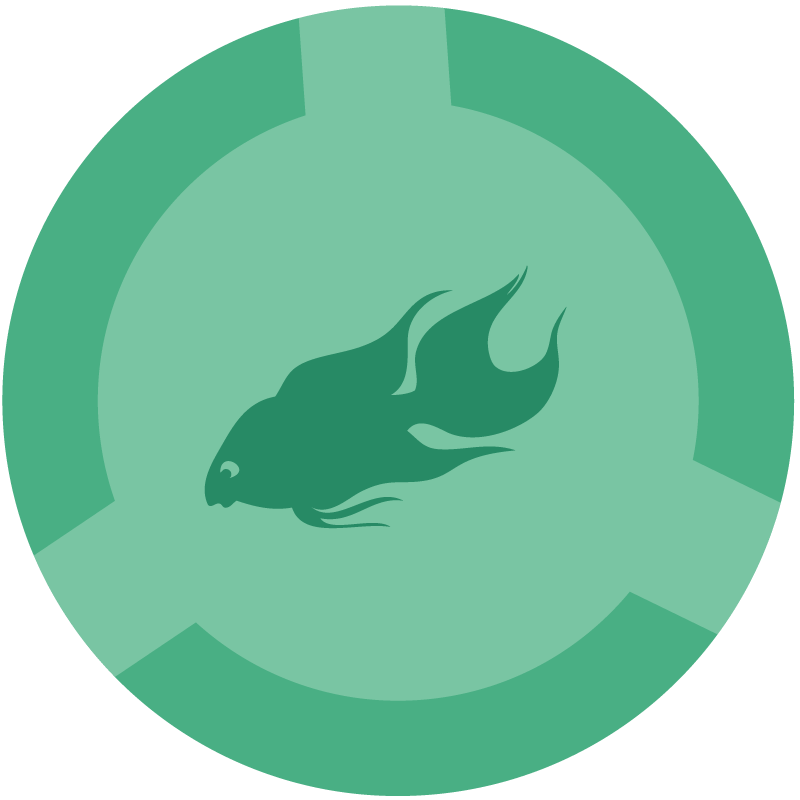 There is usually a lot of speculation regarding whether our iso-raising ranges should be wider or tighter than our open-raising ranges. On the one hand we can play a wider range of hands profitably against a weaker player. On the other hand, one of the reasons we can open-raise wide in some spots is that we have a shot at picking up the blinds. This is now significantly less likely after someone open-limps. We should also keep in mind that we invest significantly more chips with an iso-raise than we do with an open-raise.

So what is the answer? It depends on the position. We should find that while early position iso-raises are very similar to their respective raise-first-in ranges, it will likely make sense to iso-raise a little tighter than the corresponding RFI ranges in late position. There are 2 main reasons for this...

Note that these are simply rough guides and we have to take into account additional variables such as...

When these variables are taken into account, it’s not inconceivable that we might sometimes be iso-raising on the BTN looser than our standard RFI ranges from that position, but in most cases we won’t be.

Before we check out these ranges, there is one small concept we should address first.

The position of the limper probably doesn’t matter.

When constructing cold-calling and 3betting ranges, the position of the first raiser is very important. The earlier they open, the tighter we should assume their ranges are. But this is not the case with limpers.

The average limper is not going to be positionally aware. If he was good enough to understand the importance of position, he’d likely also know that it’s not considered good strategy to open-limp.

The recommended iso-raising range here is around 18.6%. This is very similar to what we would be open-raising from this position, maybe even slightly looser.  A mistake that players frequently make is to heavily expand their iso-raising range to the point where they are iso-raising stuff like K6o.

Even though this will likely end up as profitable postflop, if we assume everyone folds and the limper calls, we have to keep in mind that this scenario will only occur some of the time. We also have to worry about the players still to act behind us 3betting or overcalling. The postflop expectation of K6o is usually going to end up negative if additional players tag along or we end up folding preflop. So it’s difficult to make the overall EV of the hand positive even if we sometimes generate profit.

Again, it’s situational. If the UTG limper is really bad, then of course, we can expand further. Just as we occasionally open-raise wider when we know that there are fish in the blinds. 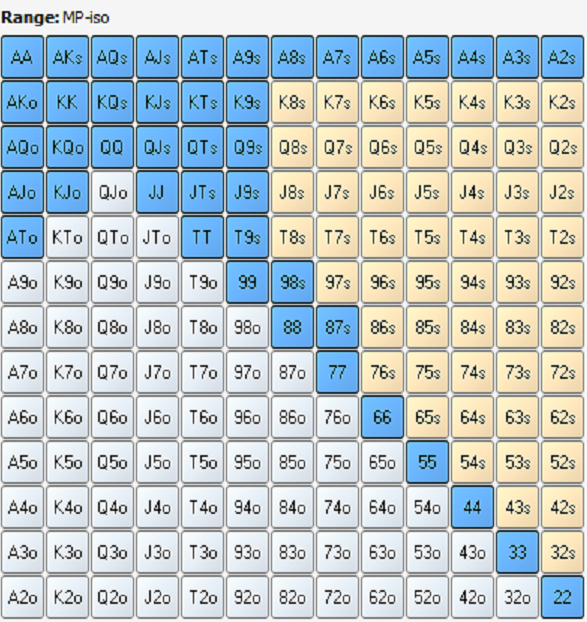 Here it is recommended to iso-raise around 24% of hands. This is slightly tighter than our CO RFI range which will usually be somewhere between 26 and 28%. 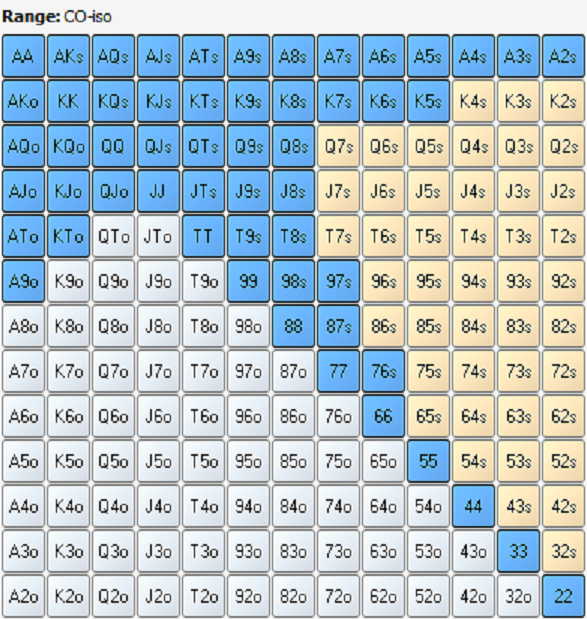 Notice also that we are showing a tendency towards iso-raising with high-equity hands as opposed to suited-connectors. Raw equity is often a little bit more important against a weaker player as opposed to playability.

The later we get, the noticeably tighter our iso-raising strategy should be relative to our RFI strategy. So here on the BTN, it is recommended to isolate around 39.1% of hands. Most players will typically open-raise around 48% by default, and frequently much higher than this on average since their opponents are not defending their blinds properly. 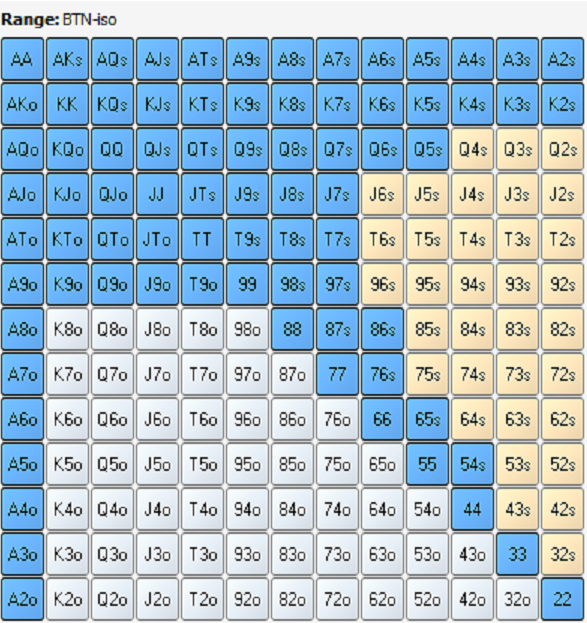 It’s actually pretty common to see players leaking money in the SB with iso-raises. If we fold we are losing at -50bb/100 hands, but players often lose at a higher rate than this with certain hands as a result of iso-raising too wide. Position is very important. Even weaker players will benefit greatly from the advantage of position, and we are going to struggle to exploit them as hard as we might if we were the ones with position. So as such, our iso-raising range OOP in the SB should be reasonably tight. 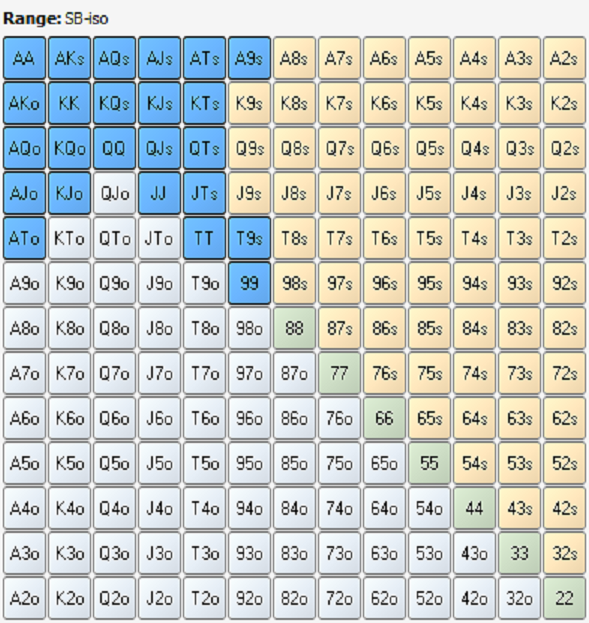 Some of us may wonder whether this means that we are simply going to be folding a whole bunch in the small-blind when facing a limp. Absolutely not. The odds we are getting are insane and we should be completing with a very wide range of hands and playing postflop against the weaker players.

The diagram below shows us the range of hands we can profitably complete against most players. This is roughly a 70% defending range in the SB against a limp from any position.
One of the reasons players iso-raise so wide from the SB is simply because they assume that completing the SB is a bad strategy. As poker players we have it drilled into us from the outset that limping is always bad. Well, in this scenario it isn’t, so we should spend a little time un-drilling the bad advice we may have received earlier on in our poker career. 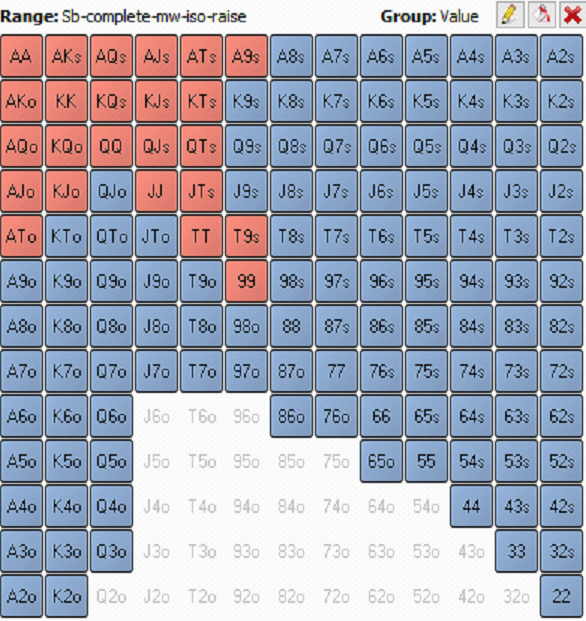 Assuming we are in the BB OOP, we are going to use a similar iso-raising range to the one we use in the SB.

The difference here is that if we don’t want to iso-raise, we can freeroll a flop by checking and so can play 100% of our holdings in this scenario.

Assuming we are in the BB and the SB completes, we should be able to get away with raising a very wide range, similar to the type of range we might open-raise on the BTN.

While there are some good players who are employing a SB completing strategy, the vast majority of our opponents who do this will be weak players. We know that we are guaranteed position postflop, and also know that there are no players behind us who might overcall or squeeze. This is a very good situation for us and we should be playing aggressively. 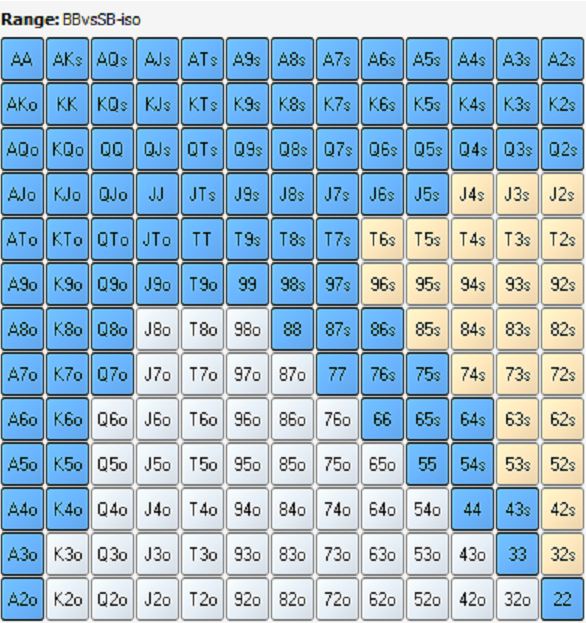 Now for a few pointers on raise sizing.

Don’t be Afraid to make it Big - A common leak player have is routinely iso-raising to 3bb or so. It’s reasonably straightforward to show with DB analysis, that in most cases a 4 or 5bb iso is going to have better results. If villain is a calling station, why not iso to 10bb with our Aces?

Make it Larger OOP – 4bb IP, 5bb OOP - Usually we’ll iso a little larger OOP. We have a stronger range here as we’ve seen, plus we are not super thrilled at the prospect of getting called and having to play OOP. So it’s really not a big problem if we just end up taking it down preflop. 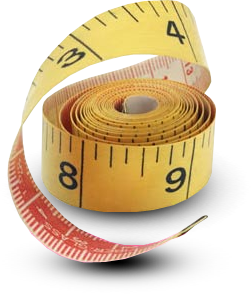 Know when to Iso Small - Just because big isos are better in general, it doesn’t mean they are always the correct choice. Here is when a small iso will do best (even a min-raise in some cases).

Know when to Iso Big

Naturally iso-raising is a little bit more nuanced than we have made it out to be here. We have also not covered every situation. For example

We also need to spend a bit of time understanding how to play postflop after we iso-raise and get called. The information in this article should serve as a good basic introduction to iso-raising, but we should build on the principles above and continue by thinking about postflop play and other scenarios. 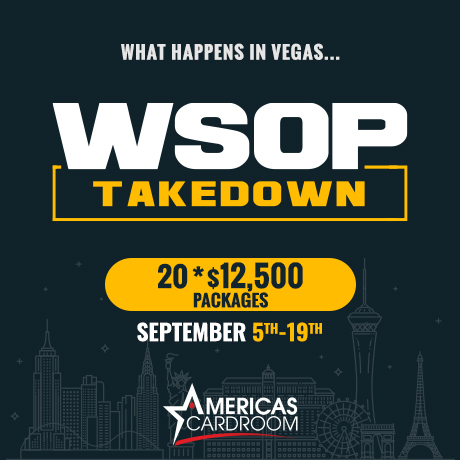